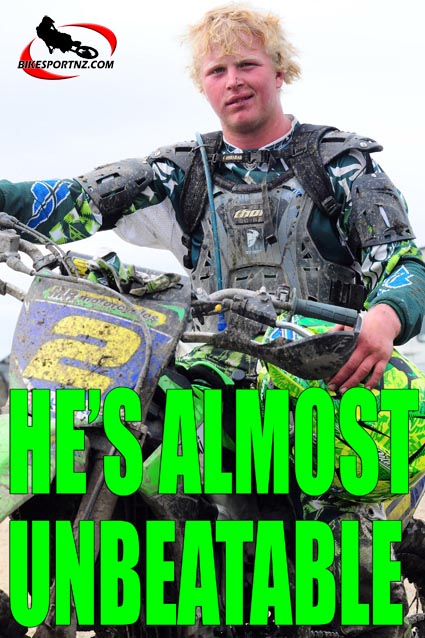 Everything is falling nicely into place for Kawasaki ace Jason Dickey.

The 16-year-old dairy farmer from Raglan has been virtually unstoppable on the motorcycle cross-country racing scene this summer and, after his dominating performance to win the 90-minute junior race at the second round of four in this season’s New Zealand Cross-country Championships near Waipukurau on Saturday, he’s on target to wrap up the national title with a round to spare.

Dickey took his Kawasaki KX250F to a convincing win at round one of the series near Blenheim just over a week ago and he repeated the dose at round two in the Hawke’s Bay on Saturday, giving him a 1-1 score-line thus far.

Only three of the four rounds count towards the championships, with riders able to discard their one worst score, but another performance at round three like the one he produced near Waipukurau on Saturday and he’ll be unbeatable.

Round three is set for farmland near Christchurch in a fortnight’s time (April 30).

“I got a reasonable start in Saturday’s race, about fourth place into turn one, and then picked off the riders ahead of me to take the lead before the end of the first lap,” said Dickey.

“I tried to put a gap on the rest of the field so I rode quite hard for the next lap. I just tried to ride intelligently and not crash.”

In the end, Dickey finished a minute ahead of Maruia’s Ethan Bruce (Yamaha YZ125) and they were two of only 10 riders among the 25-rider field to complete six laps in the 90-minute race.

“I finished runner-up in the nationals last year but the rider who won, Palmerston North’s Jordan Wilson, has now moved up to the senior ranks, so it just feels right that I am winning now.”

Dickey also leads the junior class in the parallel North Island Cross-country Championships series after four of five rounds and is obviously on target to wrap that title up as well.