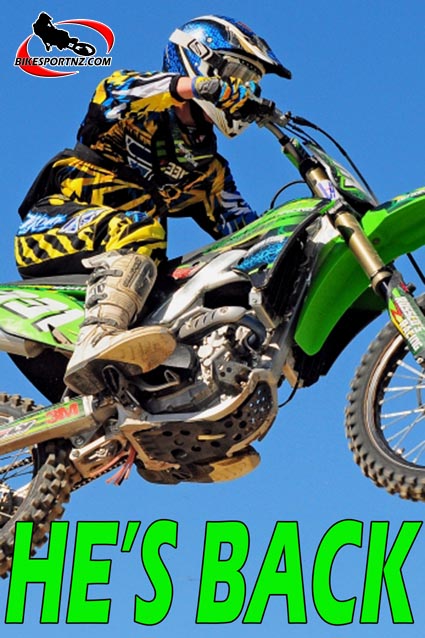 It was a winning return to the race track for Rotorua motocross ace Scott Canham on Friday.

The Kawasaki rider was thrilled to make a pain-free return to the sport following a prolonged spell on the sidelines, but, significantly, he also led his motocross team to victory at the annual Western Heights High School multi-sports tournament.

More than 20 schools participated in the event, clashing in a multitude of sporting codes, including rugby, football, netball and basketball.

“I think this is the first time our school has ever won the motocross trophy,” said the 17-year-old year 13 pupil. “It was a huge surprise to us all.  Matamata got second and Trident High School finished third.”

So complete was Canham’s comeback that he clean-swept his 15-18 years’ 250cc four-stroke class, taking his Kawasaki KX250F to a hat-trick of wins.

“This helped our school win the overall school trophy, but the younger riders in the team also did well. It was hard after having nine months off the bike after my knee reconstruction. I only got the okay to ride a month ago from the specialist so I thought this tournament would be a good practice run for me.

“I had to ride hard to keep them from passing me but I just hung in there. It was a great day the track was really good.”

Canham now looks ahead to immersing himself completely in top level competition again.

“My next race will be May 1 at Ardmore for the Secondary Schools Motocross Championships in Auckland. Then the Hauraki Plains College is holding a motocross championship on May 6 at Patetonga. These will be a good run up for me before the big annual Queen’s Birthday event at Tokoroa, where I will ride the MX2 class.”