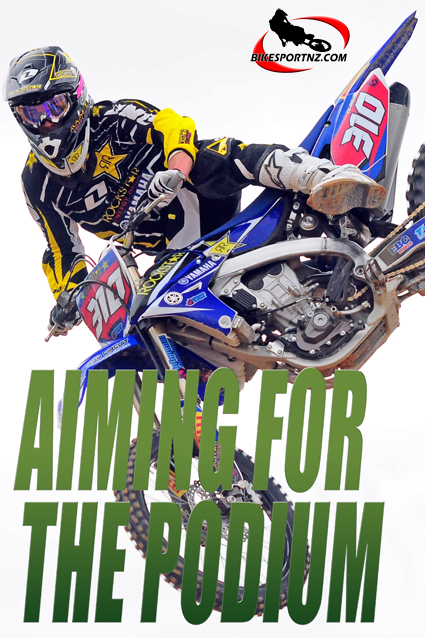 Hamilton’s Hayden Clark is determined to finish on the podium at the biggest motocross event on the New Zealand calendar, this weekend’s Woodville GP.

Unfortunately one of the main obstacles towards Clark achieving that dream is his own high-profile MXDK Rockstar Yamaha team-mate, Motueka’s Josh Coppins.

Former Grand Prix campaigner Coppins is a four-time former winner at Woodville and the favourite to win again this time around, but Clark fancies his chances of at least joining the South Island hero on the podium.

The 20-year-old Clark has already shown he can match Coppins this season and knows he can probably beat him again if he has a perfect run at Woodville.

Clark was one of very few riders able to take a race win off Coppins during the Motueka man’s march towards the New Zealand Supercross Championship title earlier this month.

“Hayden and I have worked pretty hard together over the past few weeks,” said MXDK Rockstar Yamaha team boss Darryll King.

“It’s going to be a very exciting weekend for the whole team actually. We will have four riders in action — Hayden, Josh and Waitakere’s Ethan Martens and I will even have a bit of a play myself, on a YZ250 two-stroke in the MX2 class.

But Clark will need to be at the top of his game. In addition to Coppins, Clark will need to overcome a cluster of very fast Kiwi stars, talented riders such as Rotorua’s Michael Phillips (Honda), Christchurch’s Justin McDonald (Honda), Mount Maunganui’s Cody Cooper (Suzuki), Waitakere’s Shaun Fogarty (KTM) and Hamilton’s Jesse Wiki (Honda).

“I know Hayden will be in the mix there somewhere. He’s the youngest of all those top five or six riders but very capable of beating them all,” said King.

Regardless of what happens at Woodville, Clark has already had a memorable year. He is a proud new dad, father to six-week-old daughter Cathy, with partner Renee.