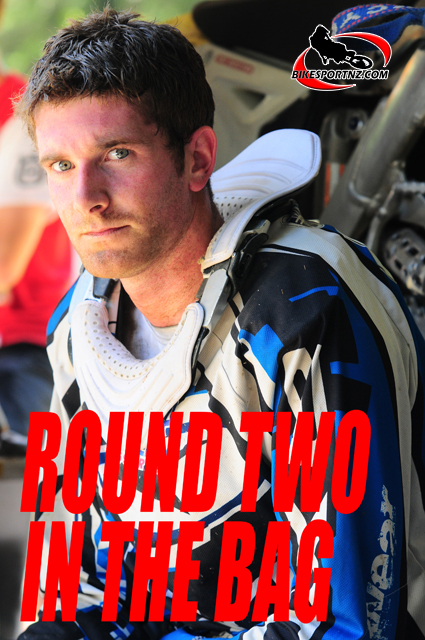 Taupo’s Rory Mead ruled the day at round two of the Yamaha New Zealand Enduro Championships at Oparau, near Kawhia, on Saturday.

It was another gruelling test of both man and machine but the Yamaha ace proved up to the task, finishing the day 22 seconds clear of great rival Karl Power (Honda), with multi-time former champion Chris Birch (KTM), of Auckland, coming home third, another 10 seconds further back.

“It was a very tough day,” said Motorcycling New Zealand enduro commissioner Gary Powell. “It had been raining quite a lot in the region and, although the rain had stopped by the time racing began, the damage was already done.

“The course became quite rutted in places and there were a dozen bikes stuck on one particularly steep hill, although most of the expert grade riders made it through without losing too much time.

“There will be some sore bodies this week. As usual, (event organiser) Sean Clarke and his team did a fantastic job. He course was well marked.”

For Kiwi international Birch the event was his farewell performance in New Zealand.

Birch, and his wife Monica, have packed their bags for a life in Durban, South Africa, and leave in less than two weeks’ time.

Round three of the Yamaha-sponsored series is set for Whangamata on February 26.