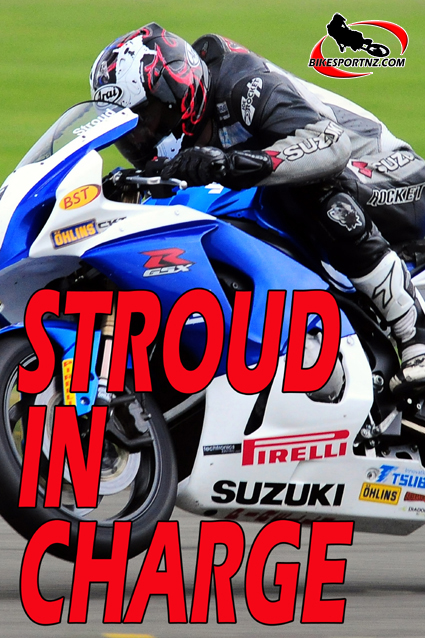 Down in third position after the opening round of the Suzuki International Tri Series at Hampton Downs a week ago, defending champion Andrew Stroud struck back in the most comprehensive fashion at round two on Saturday, scoring back-to-back wins.

By winning both Saturday’s superbike races at Manfeild, in Feilding, the 42-year-old Suzuki star from Hamilton catapulted himself to the top of the series standings with just one round, the famous Cemetery Circuit race meeting on the streets of Wanganui, still to come on Boxing Day.

A smiling Stroud was pleased to report that his wife, Karyn, had just earlier that day given birth to their eighth child, another daughter, Lucia, so it was a huge surprise after that momentous news that he could compose himself enough to race at breakneck speed and beat arch rival Robbie Bugden, from Australia

The two Suzuki men finished 1-2 in both races on Saturday, the pair of them leapfrogging the round one winner, Tauranga’s Sloan Frost (BMW), in the series standings.

Stroud is now three points ahead of Bugden in the standings with Frost another five points further back, Hamilton’s Nick Cole (Kawasaki) in fourth place overall and Whakatane’s Tony Rees (Yamaha) rounding out the top five.

“I was made to work for it today,” said Stroud afterwards. “It helped me a bit that I managed to qualify fastest and Robbie was on the second row. He’s riding as fast as ever, though, and I know I can’t afford to let up. Our Suzuki GSX-R1000 bikes are pretty much identical, so it’s going to come down to tyre choices or whoever makes fewer mistakes.”

Bugden said he was looking forward to racing for the first time at Wanganui’s final round this coming weekend but admitted Stroud was the favourite.

“Stroudy and (Feilding’s) Craig Shirriffs too are very good at Wanganui but I will just see what feeling I get out of the bike and take it from there.

“It will be a bit of an unknown for me … I have driven around the Wanganui circuit this week and I can see it is a very stop-start course and there are some very fast sections and blind corners too. It’s going to be very interesting.

“I have a lot to learn in very little time but I’m going there with an open mind.”

Other riders to produce outstanding performances on Saturday included Wellington’s Glen Skachill (Suzuki), who bagged another two wins in the 600 Supers class. He is now unbeaten in his four races the series thus far.

Behind him, the battling between Christchurch riders Dennis Charlett (Suzuki) and John Ross (Yamaha) had the crowd on their feet.

Ross also raced a BMW to top the Bears (non-Japanese bike) class and in that division he is now 21 points ahead of Australian pair Joel Reed (Aprilia) and John Woodley (Augusta).

Palmerston North’s Glenn Williams (Yamaha) was unstoppable in the Post Classics class. The 47-year-old Williams won the first race easily and then deliberately handicapped himself to start off the back of the grid in his second outing.

Despite starting last, he was up to fifth by the end of the first lap and had taken the lead a lap later.

However, because Williams missed round one at Hampton Downs a week earlier, he finds himself down in sixth place in the series standings.

Instead, it is Paraparaumu’s Sean Donnelly (Kawasaki) who leads the points. Donnelly finished 3-5 at Manfeild on Saturday.

Italian world No.2 Davide Gozzini (TM) was unbeatable in the under-450cc Super Moto class, beating Auckland’s Toby Summers (Yamaha) to the flag in race one and heading Wanganui’s Jayden Carrick (Suzuki) to the finish in race two.

After two rounds, Gozzini leads the class by 11 points from Summers, with Carrick third overall, another four points further back.

Wanganui’s national champions Steve Bron and Dennis Simonsen won both races at Manfeild and now lead the series by six points from fellow Wanganui pair Adam Unsworth and Stu Dawe, with Auckland pairing Desmond James and Jonathon Shaw another 25 points behind in third. 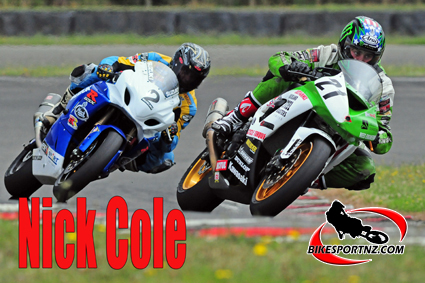 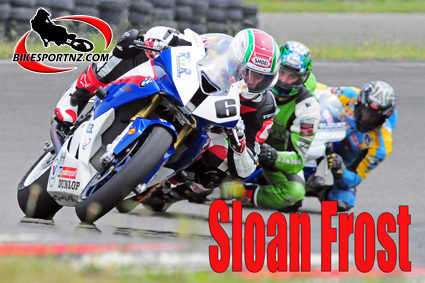