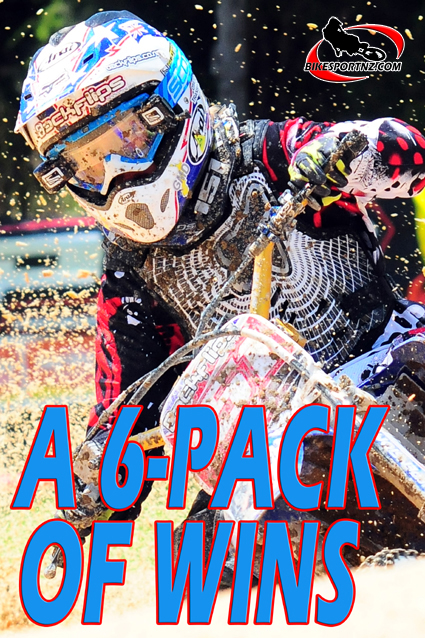 She may be a girl and a year or two younger than many of her male rivals, but Otago’s Courtney Duncan expects no favours.

But that’s okay; she gives no favours either.

The 14-year-old Yamaha ace may also be racing an 85cc two-stroke against the much more powerful 125cc two-stroke and 250cc four-stroke bikes of her rivals in the women’s division, but she doesn’t mind that one little bit … as long as she’s winning races.

And winning races is what this year 10 pupil from East Otago High School does a lot of.

Duncan raced her Backflips Yamaha YZ85 in both the 14-16 years’ 85cc class and in the over-12 years’ women’s class at the 39th annual Whakatane Summercross on Monday and won every race she started.

The traditional big post-Christmas motocross in the Bay of Plenty was another huge event with top riders from throughout the country, and from overseas too, lining up to race at the sun-baked track at Awakaponga, near Matata.

Duncan finished the day unbeaten, winning all three 14-16 years’ 85cc races against the boys and also scored a hat-trick in the women’s division, beating such high-profile riders as Mangakino’s Alex Dillon (Honda) and Kiwi international Nikki Scott (KTM), the 21-year-old who has raced with success in the women’s world championships in Europe.

One race was particularly impressive.

In one of the battles against the boys she crashed as she exited turn one at the start, picked herself up, dusted off and then set out after the disappearing bunch.

Within just one lap she was up to seventh position in the 22-rider field and, by the end of the next lap, she was out in front and pulling away.

“I wasn’t thinking about the crash, just about getting up and getting going again. I knew, if I didn’t muck about, I could pass riders two or three at a time on the opening lap,” she explained.

Her next big trip is to race at the 50th annual Woodville Motocross on January 29-30. Does she expect she’ll win there too?

“I don’t travel all the way up from the South Island to come second,” she replied indignantly.