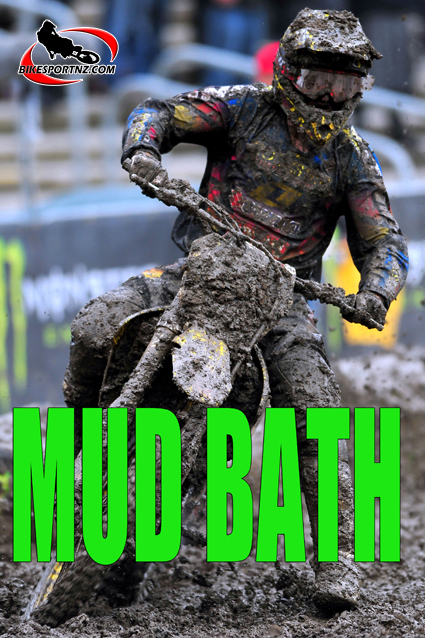 Dunedin’s Carisbrook Stadium may well be famously known as “The House of Pain” by rugby followers in New Zealand, but now it’s more likely to be dubbed “The House of Rain” by the supercross community after Saturday night’s racing.

Wet and treacherous conditions prevailed at round five of the Monster Energy Australasian Super X event in Dunedin on Saturday night, allowing American Josh Hansen (Kawasaki) to demonstrate his skill on the slippery track to win both motos in the Double Header final.

Australia’s Matt Moss (Suzuki) was the overall winner in the Lites (250cc) class.

Kawasaki’s Hansen was the only rider to stay relatively clean as he claimed both holeshots and never looked back in the two 12-lap final races, pushing him further ahead of Yamaha’s Jay Marmont in the overall championship standings.

KTM’s Tye Simmonds rode the best he has all season to claim second in the first moto and third in the second after a great battle with Suzuki’s Jake Moss.

Moss made a great pass on Simmonds on the final corner of the second race to pip Simmonds at the post. Moss and Simmonds tied on round points with Moss claiming second on a count back.

Top Kiwi was Mount Maunganui’s Cody Cooper (Suzuki) (pictured above), who managed 5-6 results for fifth overall on the night.

Cooper had finished sixth overall at the only other round of the series he has contested, round four last weekend at Auckland’s North Harbour Stadium.

“That was a scary one, especially with points,” said Hansen afterwards.

“It was super wet, very muddy and a lot of lappers. Starts were really important and I had to be consistent and smart out there. It’s great to have the support I have behind me. Big thanks to everyone who has made it possible to be here and Troy Carroll from the Kawasaki Racing Team for all his help. This series is really cool and has been a lot of fun.”

Simmonds agreed it was difficult.

“It was a tough night, but it was good fun racing in the mud. It doesn’t rain much in Bourke so overall it was an awesome night. I really want to thank RACESAFE for helping me out.”

The first of two eight lap races in the Double Header final for the Lites was a nail biter with Suzuki’s Matt Moss and Suzuki’s Steven Clarke engaging in a back and forth battle for the lead, with Clarke the eventual winner after overtaking Moss on the second last corner.

Moss had a dominant win in the second final with Larsen second and Kawasaki’s Cody Mackie third.

Best performed Kiwi in the Lites class in Dunedin was Christchurch’s Craig Smith (Honda), who finished ninth and 10th in his two races, good enough for eighth overall on the night.

Larsen still leads the championship, but is only four points ahead of Moss and KTM’s Ryan Marmont is third.

The penultimate round of the championship will be held at Parramatta Stadium this Saturday, November 27. 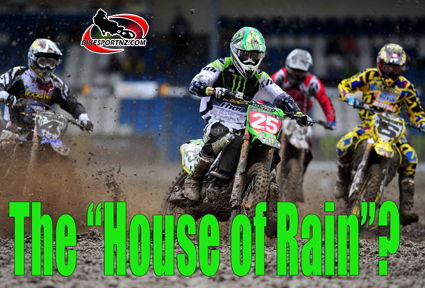 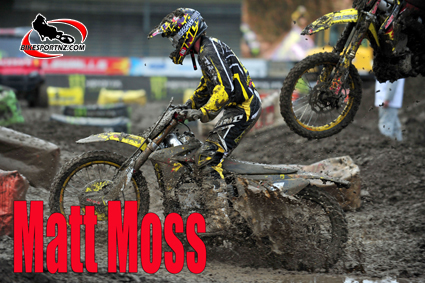