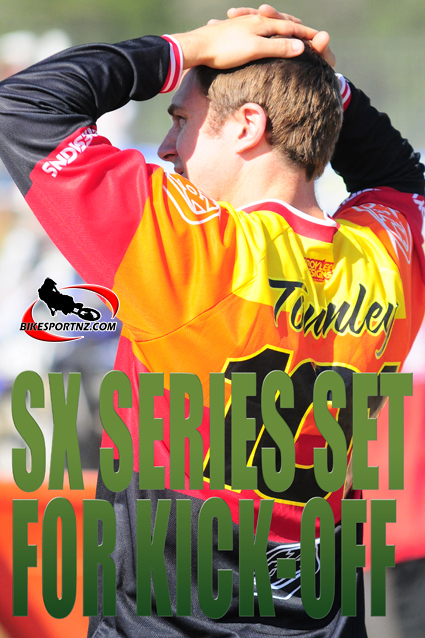 The Monster Energy Australian SuperX series kicks off this weekend with defending champion Chad Reed expected to line up on a Honda.

Taupo’s Townley, who was sidelined with injury when this series ran last season, reports that he is committed to racing the two New Zealand round s and also the final two Australian rounds only.

Townley was East Coast Lites Supercross Champion in the United States in 2007 and, with those credentials, this makes him one of the favourites to win at any supercross event he chooses to enter. He was also crowned New Zealand open class supercross champion earlier this year.

As with this series last season, the circuits being created for this SuperX series will be the closest thing to true AMA-style tracks outside of the United States and this year there will be two rounds staged in New Zealand, in North Harbour Stadium on November 13 and in Dunedin a week later on November 20.

American Jason Baker is the circuit builder. He began racing motocross in 1998 at the late age of 19. Baker won many C & B titles in Florida and on the National Amateur Circuit during his first years of racing. When he decided to make it a career he began working with world-renowned MX/SX coach and former champion, Ronnie Tichenor.

Over the next few years, Baker propelled to the top of the A class in Florida and beyond. By the time he was 24, he was able to obtain his Pro-License. His hard work and dedication was seen by many, but like many… injuries prevailed.

During the many hours of training with RTMX, he would help out by prepping the different tracks they were riding at. Quickly, Tichenor and many of his students saw the potential that Baker had building tracks. He quickly learned the skills needed to build and groom a professional track. Baker put many hours of practice into his own personal track in Lakeland, Florida, and once again people began to see his potential.

Riders such as James Stewart, Timmy Ferry and Chad Reed would come to train at Baker’s supercross track because it was one of the best around.

After hearing from so many people just how good he was on the equipment, and how awesome his tracks turned out … Baker decided to end the injuries, and hang up his boots … and in 2003 Dream Traxx began.

Now, Baker has travelled all over the world to help advance the sport by building the best possible tracks he can. He builds for some of the world’s fastest racers; Chad Reed, James Stewart, Timmy Ferry, and Nico Izzi just to name a few.

Jason was also hired by Chad Reed to build the last five rounds of the 2008 Super X series and all tracks for the 2009 series. Many said these were some of the best tracks Australia has ever seen. Hired once again to return for the 2010 Super X series, Baker is looking forward to once again creating and building awesome tracks to make this series another success. A lot has changed since Jason Baker’s racing days began back in 1998. He is now married to his wife Stacey, has a daughter Reese and a son Jace, and just rides for fun.

But, the hard work and dedication that helped Baker start his racing career, is now what drives him to have the best track building company in the world.

The first test of his work will come with the opening round of the Monster Energy Super X series this weekend in Newcastle: