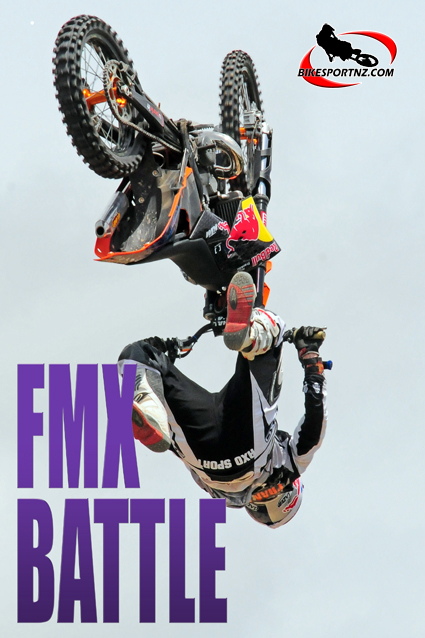 X-games and Red Bull X-fighters have both made their mark on the world but hold limited spaces for our Australasian market.  So the annual Red Bull-sponsored FMX Battle is one of a kind hitting Wanganui on December 28 for the second year running.

The line-up of riders is, to say the least, impressive. Manawatu’s Levi Sherwood was hoping to compete but after a major crash breaking both his femur and wrist he has been forced to pull out.  Avid fans can rest easy though; he is still excited as ever to be involved in other capacities.

“I’ll defiantly still be involved – I want to help out however I can as it’s a great event for the local industry” he says.

Despite Sherwood’s withdrawal, the show is still expected to have the wow-factor to satisfy all ages.  Last year’s champion and Red Bull rider Nick Franklin (pictured above) has confirmed his participation and Steve Sommerfeld, third place rival, will also be back with a score to settle.  New faces to Red Bull FMX Battle include Crusty Demon Steve Mini who has recently been touring Australia with Travis Pastrana and the Nitro Circus.

New Zealand will be well represented with Encounter FMX riders Josh Thomson, Ryan Laskey, and Liston Borrie all set to take on the championship challenge.  Crowds may even see first-time competitor and local rider, Jason White, take the stage which just goes the show the great opportunities this event is providing to the industry.

Tickets will be available from the gate or you can pre-purchase from www.fmxbattle.co.nz

Get a group together for this great end-of-year event.

Tricks that you could expect to see:

Tricks are the bread and butter of freestyle motocross riders. Basic FMX tricks include no-footed can cans, heel-clickers and nac nacs while more advanced manoeuvres range from hart attacks to kiss of deaths as well a the backflip.

Cliffhanger – While in the air, stands straight up and catch the underside of the handlebars with toes. Place hands above in the rollercoaster position.

Coffin and Lazy Boy – For the coffin, extend legs in front of bike below the handlebars and lie back on the seat as far as possible. For the lazy boy, release the handlebars and extend arms back over head. More points are scored the farther the arm and leg extension.

Dead Body – Place body over the front of the bike while holding the bars and keep entire body horizontal with the bike.

Hart Attack – Point both legs pointing straight up in the air while performing the superman.

Indian Air – Extends and cross legs during a trick in a scissor motion.

Kiss of Death – While in the air, position the bike as close to vertical as possible then kick legs up above head.

Whip – A whip is when the rider whips the bike sideways in the air so that the machine comes as close as possible to being at a right-angle before straightening out for landing.

Nac Nac – While leaving the jump, whip the bike sideways, remove front leg and swing it around behind the bike to the other side. Look back for additional points.

Rock Solid – Perform the Superman Seat Grab, release the seat and extend both arms away from the bike so that the bike is completely detached. Grab the seat and remount the bike after catching enough air.

Superman – Release both feet and kick them straight back.

Tsunami – Perform headstand in front to handlebars while keeping bike horizontal and level.

Dead Body – A dead body consists of the rider taking his feet off the pegs and extending his legs through the arms and up over the handlebars. Once in this position, the rider straightens their body completely.

Backflip – A trick first performed by Carey Hart, once the Holy Grail of Motocross, now is a very common motorcycle trick having many variants. It involves the rider rotating the motorcycle backwards until they have done one full rotation. Variants of this trick include any of the regular tricks, whilst doing a backflip. When naming the trick, the regular trick, for example a Can-Can, is said followed by ‘Backflip.’ E.g. ‘Can-Can Backflip’.

Heal-clicker Flip – The rider performs a heal-clicker (with hands still on the bars, legs are wrapped around the handle bars, touching together) during the motion of a backflip.

Cordova Flip – With hands on grips the rider brings their feet up underneath the bars and presses chest up and looks back underneath while performing a backflip rotation.

Tsunami Flip – The rider stretches out their body into a handstand as they both perform a backflip.