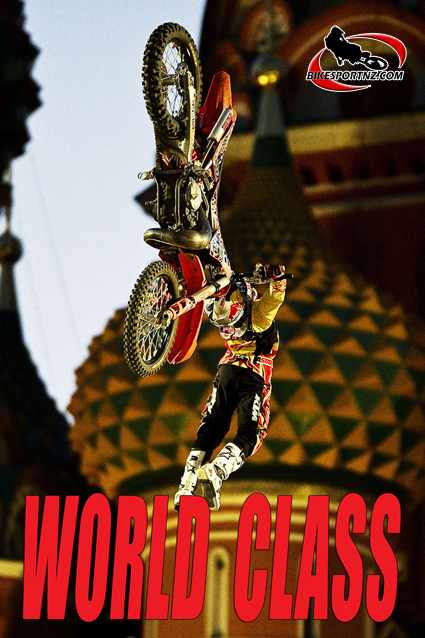 It’s back again! FMX Battle is returning to Wanganui this summer with even more action and a tougher line-up of competitors.

FMX Battle is New Zealand’s only annual Freestyle MotoX competition, and has a head-to-head competition style making it fast paced and spectator friendly.  The event made its debut last December, in conjunction with Race Week, and proved to be a great night out for all ages.

With rivals from over the ditch returning again this year, the competition is guaranteed to be worth watching. Red Bull X-Fighters winner Levi Sherwood has confirmed his participation at the event making it his first performance back in New Zealand after his current leg injury.

The 18-year-old Sherwood won the X-Fighters in Moscow and London this year, and also earned himself a silver medal at X-Games for Freestyle MotoX.   Other confirmed New Zealand and Australian riders are due to be released next month so keep your eyes peeled for more details.

The brain behind the operation is ‘Scary’ Mary Perkins who runs Encounter FMX, New Zealand’s premier FMX team.  Perkins will be putting $10,000 prize money on the line for Australasia’s most impressive and consistent rider.

‘Scary’ Mary and her team are running the competition in a similar format to the popular RedBull X-Fighters tour and as Red Bull has already signed on as the event’s major sponsor, plans are well underway.  Additional sponsors include Wanganui District Council and Smith Optics.

So mark your calendars for Tuesday, December 28, and get along to the Cooks Gardens in Wanganui to see all the action FMX Battle will have to offer – sure to be a great night for all! For more information check out www.fmxbattle.co.nz