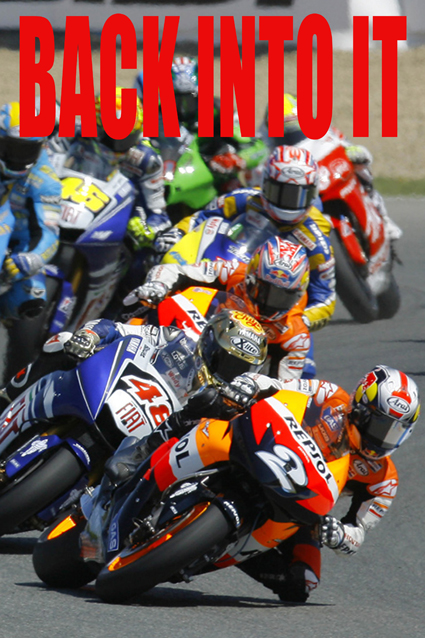 After a well-earned two-week summer break, the MotoGP competition kicks back into life at Brno, in the Czech Republic, this weekend, signalling the second half of the 18-race season.

Defending champion Rossi is hoping to be back to his best after the time off has given him further opportunity to recover from the broken leg and injured shoulder he sustained earlier in the season.

Lorenzo has won an incredible six out of nine races so far this season and come second in the remainder and he signed off the for the summer break in the best possible frame of mind, having won commandingly at Laguna Seca last time out.

The 23-year-old has spent time fitness training and relaxing in the Dominican Republic during the holidays and is looking forward to getting back to the business of racing this weekend. He has three wins at Brno to his name, one in 125cc and two in 250cc, but he has had little luck there in MotoGP and last year he crashed out when sparring for the lead with Rossi, something he will be hoping to forget this time around.

Brno is an historic track for world champion Rossi as it was there that he took the first of his 104 Grand Prix wins, in the 125cc class in 1996.

Since then he has gone on to take a further six wins at the track, five of them in MotoGP and including the last two years. The 31-year-old Italian made a sensational return to the podium at Laguna Seca only seven weeks after breaking his leg but he was not yet back to peak physical condition.

A two-week holiday has given the nine-time champion another chance to work on his strength and fitness and he hopes to be in much better shape at this race and ready to mount a challenge for race wins over the remaining half of the season.

Suzuki riders Álvaro Bautista and Loris Capirossi are also both looking forward to getting to grips with the 5403m Czech circuit, as it is a track that the pair have both enjoyed success at in recent seasons.

Bautista won at Brno in the 125cc class in 2006 and finished second and third in 2008 and 2009 respectively in the 250cc category. He will certainly be aiming to put the memories of the last two MotoGPs behind him, where he was eliminated in both races by other riders.

Capirossi has tasted success in the Czech Republic on the Rizla Suzuki GSV-R, as he raced the machine to third place in 2008. The experienced Italian also scored a second place at Brno in a MotoGP event in 2005 and topped the podium in 2006.

A Grand Prix was first held on the Brno road circuit in 1965 and since then over 40 World Championship races have been contested there. Today the modern track retains much of the character of the original road circuit, with its winding chicanes and dramatic elevation changes and it is a favourite track with the riders, often bringing as it does fast and close racing.

Lorenzo said he would be “targeting a first Brno MotoGP podium”.

“The holidays were perfect. Ten days in the Caribbean for rest and fun, charging the batteries for the second half of the season. I needed it because the calendar has been busy in the last month and now I can focus on the rest of the season.

“We are going to Brno, a track I like and where I’ve won three times, but never in MotoGP. I haven’t even got a podium here and this is my challenge, my first podium in the second part of the season and in Brno. Czech Republic is a nice country, with amazing people at the race and also the track is impressive, fast and with some good hills. After the race I will stay in Brno to try something new on the bike, something to improve our bike until the end of championship. Good place to restart!”

Rossi, meanwhile, said he was “aiming for a good second half!”

“I’ve had a good break and it’s helped me a lot to have this time to work on my physical condition. I’m feeling good about my leg and my shoulder and I hope that this weekend I’ll be feeling much stronger.

“Brno is a great track for me and it’s always special because it’s the first place I ever won at. Last year I had a great race, this year will be harder because I’m not completely fit yet but I am looking forward to getting back on the bike. We have half the season still to go and our aim is to have a good second half!”