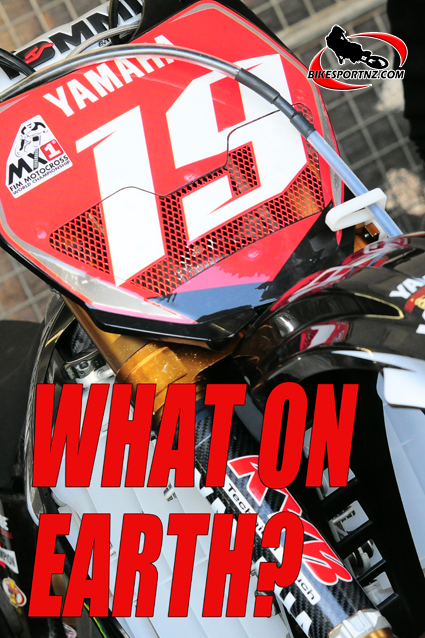 Stubbornness in sticking to the rules and a refusal to find a compromise or to back down may prevent this year’s Motocross of Nations from becoming a classic “Us versus Them” encounter, an “Americans versus the Euros” clash.

The Italian Motorcycle Federation (FMI) has decided that Italian reigning world MX1 champion Antonio Cairoli (KTM) and former MX1 world champion David Philippaerts (Yamaha) cannot be considered for the Italian team because their employers, KTM and Yamaha respectively, want to have their brand logos on the rider’s jersey and the FMI won’t allow it.

It is understood that the Motocross of Nations is not all about riding for your bike team but rather representing your country. However, the teams do employ the riders for a hefty salary and also supply the bikes, mechanics and other necessities of racing.

Both sides refuse to back down and this means that, according to the FMI, both Cairoli and Philippaerts are “unable to be considered for the final selection for the Italian team”.

Many of the typically 80,000 or so fans likely to show up at Lakewood, Colorado, for this year’s edition of the Motocross of Nations are therefore not going to be able to see the top two MX1 riders on the planet – Cairoli and American champion Ryan Dungey – go head-to-head.

While this showdown is just one of many mouth-watering clashes that could happen that weekend of September 25-26, the anticipated one between Dungey and Cairoli or Andrew Short/James Stewart and Phillipaerts are widely regarded as two of the biggest and best.  Both Cairoli and Dungey could lay claim to being the best MX1 rider in the world at present.

Yamaha Motor Europe and KTM Sport Motorcycles have said they are very “disappointed” by this turn of events.

“After discussions with the Italian Federation, in which Yamaha Motor Europe and KTM Sport Motorcycles were willing and fully open for negotiation regarding representation on the official Italian team jersey, we were disappointed to learn that 2008 MX1-GP World Champion Philippaerts and reigning MX1-GP World Champion Cairoli (presently 3rd and 1st in the 2010 standings respectively) were eliminated from the final short-list,” reads as combined Yamaha-KTM press release.

“We would like to clarify that both riders are available but the condition of the FMI that there will be no space allowed at all for the manufacturer or its sponsors on the front of jersey is not acceptable to both Yamaha and KTM.

“The FMI was only prepared to open two tiny spaces on the sleeve of each jersey and despite several efforts from Yamaha and KTM a compromise for a frontal space was not reached. Yamaha and KTM had already accepted for the FMI to decide the base colour and to add their own sponsors on the jersey, if not in conflict with existing team partners.

“Discussions of this nature are not unusual for the Motocross of Nations with many riders, teams, brands and companies represented by the three best riders from each country around the globe coming together under one umbrella.

“For virtually all other teams, a compromise as proposed by Yamaha and KTM is considered very much acceptable for all parties involved. Other countries allow the riders to use their regular GP clothing without or virtually without any modification.

“Manufacturers and title sponsors/partners finance a whole season of international and national racing activities up to and including the Motocross of Nations; this includes staff, infrastructure, technical support and development, all at considerable cost.

“In our opinion, visible manufacturer and sponsor branding is a necessary requirement to allow top athletes to continue to represent their teams and importantly shine and bring positive attention for their respective nationalities at the very highest level.

“Yamaha and KTM sincerely regret that both riders will seemingly not be able to enter the Motocross of Nations for Italy in 2010, which we regard as a fantastic event for motocross followers all around the world and prestigious for all participants.

“Yamaha and KTM remain open to a solution so that fans of motocross and the Italian team in an era when the country is proving to be strong in the discipline will not be deprived.”