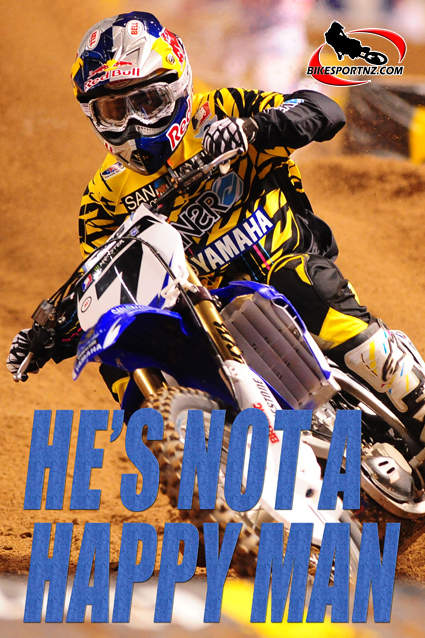 Yamaha’s James Stewart is not a happy man.

The motocross star’s comeback to racing following seven months on the sideline with injury was less than stellar — he finished 3-35 at Unadilla at the weekend, the ninth round of 12 in the AMA nationals – and he was left off the team to represent the United States at this year’s Motocross of Nations.

He had this to say in an open letter to his fans:

“I was … told that if I was to make it back for the last four Nationals, I would be given a shot at being on the team. I feel like I was straight-up lied to.

“As many of you already know, last weekend marked my return to racing after way too long off the track, thanks to a broken wrist I suffered in the beginning of the Supercross series.

“After nearly eight months off, I decided to return for the last four Nationals. This decision was based on a few reasons; first and foremost was my own desire to race again, along with the fact that I owed it to both my fans and my sponsors to come back after spending so much time on the injured list this year.

“But the other main reason I chose to come back for the last four, beginning with Unadilla, was because of a discussion I had with the decision makers for Team USA in Colorado this year regarding the MXoN.

“At the time, I was told that if I was to make my recovery, begin testing, and get back to racing by Unadilla, that I would be given a spot (or at least a shot at a spot) for the final team. Being on the MXoN team in the past has been one of the greatest experiences of my entire career, so after they told me I had a shot, my team and I was excited, and began to get ready to race outdoors!

“Of course, we’re a Supercross-only team, so developing our bike to run outdoors with the guys that have been racing at the top level all season long was no easy goal for us … Which brings me to the race at Unadilla. When I got there, I was really excited to get out and practice, and fortunately, practice went pretty well. At that point, the track was still smooth, and though I’ve never loved Unadilla, I was feeling pretty good. My wrist felt great, and my lap times were just about where we expected them to be.

“Then, for the first moto, the track got rough and things were a bit different. All of a sudden, we could see some of the lack of preparation shining through; my bike was set up way too stiff for the rough track, but all things considered, I was pretty happy with how I rode. I got into second and my lap times were right there with Ryan Dungey’s, and again my wrist was feeling pretty good, so it was all good until I got caught up with a lapper towards the end of the race. Sure I was tired, but for not racing for that long, I was happy to be on the podium. I gave it everything I had, and it was awesome seeing all my fans out there supporting me.

“Unfortunately, the second moto didn’t quite go so well. As the track got rougher, our lack of bike preparation showed even more. After getting a bad start, I was just fighting with the bike; it was way too stiff and just not set up properly. At that point, I really had nothing to gain by staying out there, so I just decided to pull off, lick my wounds, and learn from the weekend.

“I’m not going to say I didn’t get tired, but given the lack of racing, and the fact that I know where I need to be physically to win, I feel good about Unadilla, overall. Bottom line: We’re a Supercross-only team; we got to Unadilla, and we looked like a Supercross-only team! But my wrist felt better than expected, so with a little bike prep I think we’ll be back on our game.

“But back to the MXoN topic. I was really disappointed in how that whole deal went down. Like I said earlier, after being told that if I was to make it back for the last four Nationals, I would be given a shot at being on the team. Well, when I got to Unadilla, apparently the decision had already been made before my bike was even unloaded! So after all that work from me and my team to come back in order to make the des Nations, just like that, the rug was pulled out from under me with no warning. They picked the team already, and I wasn’t on it.

“I feel like I was straight-up lied to. Being on the MXoN team is one of the biggest honours and compliments that you be given as a professional rider, and I know that with my injury there was some question as to whether I would be ready or not. I get that; all I wanted was to be even given the original chance they promised me, let me get through a couple races, and hopefully the team could see that I would be ready come September.

“At the end of the day, all that really matters to me is that Team USA wins, and I think the team they selected is a solid team that will get the job done. I mean no disrespect to any of those guys, and I hope they kick butt! I’m just bummed that I was given the fair shot that the decision makers from Team USA promised me earlier that I would have.”