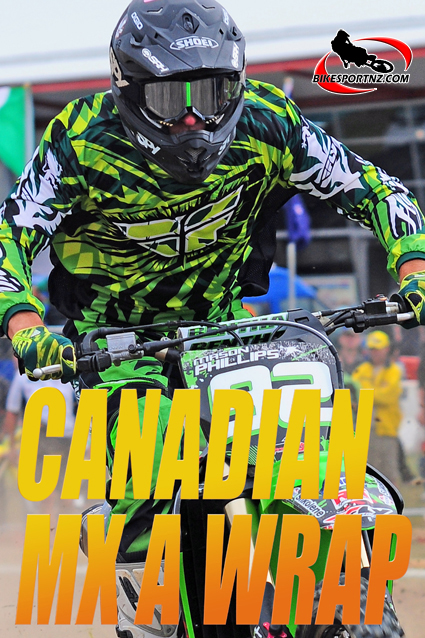 With nothing left to prove, Yamaha’s Dusty Klatt settled for second overall at the final round of the Canadian Motocross Championships at the weekend.

The Blackfoot Yamaha team rider – who had already wrapped up the MX1 title at the previous round — finished 3-1 in his two motos on Sunday.

New Zealand’s Mason Phillips had a tough day at the office, the Kawasaki rider finishing seventh in the day’s first moto but scoring no points in the next, for 12th overall on the day.

In MX2 action, outgoing champion Teddy Maier had to bow to incoming champ Tyler Medaglia in the first moto. In the second moto, Maier was led to the chequered flag by his Kawasaki team-mate Shawn Rife.

Rife, who finished third in the first moto, claimed the overall while Maier’s 2-2 finishes gave him second overall. Third overall went to Yamaha’s  Medaglia on the strength of 1-5 motos. Medaglia rode a calculated second moto to ensure he finished on two wheels and in the championship points.

In what would be a nail-biter moto, Kiniry managed to not only hold of Nemeth but also fend off every passing manoeuvre Klatt could throw at him. Two of Klatt’s moves saw him make contact with Kiniry and crash both times as a result.

Klatt, who got a mid-pack start in the first moto, had sliced and diced his way into fifth place by the midway point. He then charged his way into second place to challenge Kiniry for the lead.

After tangling with Kiniry and crashing the first time, Klatt remounted in sixth and again battled his way to the front to challenge for the lead. Again Klatt went down allowing Kiniry to comfortably take the win. Klatt would have to take satisfaction with third place behind Nemeth. Demuth and Yamaha’s Travis Sewell sealed the top-five.

About five laps into the moto, Klatt put a definitive pass on Kiniry. Once he accomplished that, Klatt checked out leaving Kiniry to fend off Demuth, then Sewell, who got by him just past the halfway point.

Kiniry, looking to end the day with the overall, re-passed Sewell on the same lap and the top three finishers were decided from that point on. Kiniry’s noteworthy 1-2 motos not only gave him the overall, they assured that he kept his No.3 ranking intact for another year.

Rain started coming down during the last moto of the day, and of the season, which coupled with high winds, added another element to the fast and demanding Walton track.

In addition to recording second overall, Klatt was officially crowned 2010 MX1 champion while the Hungarian rider Nemeth recorded third overall on the strength of 2-4 motos.

Nemeth, in his first full season of the Canadian Nationals, finished an impressive runner-up in the series.