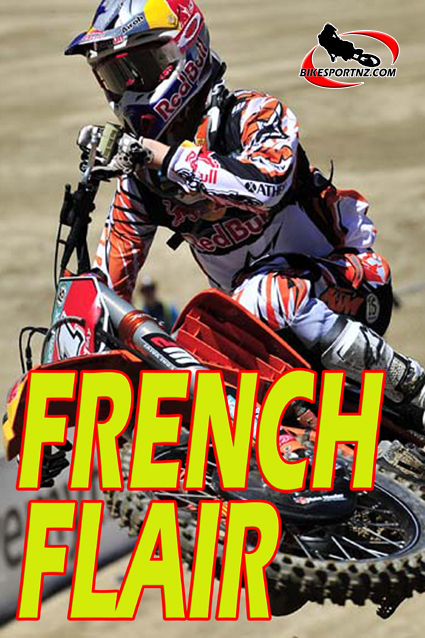 Two months head of the 64th edition of the Motocross of Nations, the French Federation has revealed a list of riders who have been pre-selected for this teams’ race.

On the podium of the last three editions, the French team will go to Thunder Valley, Colorado, in the United States, determined to get a strong result, dreaming to win again this prestigious competition after tasting MXoN victory in 2001.

National trainer since 2001, a few months prior the French Team triumph in Namur (Belgium) where they got an historical success in the Nations, Olivier Robert officially revealed this week the names of seven riders.

“As we have this year again a great number of riders who performed well all around the world, our selection counts only riders who already got heat or GP wins have been pre selected … Marvin Musquin, Christophe Pourcel, Steven Frossard, Gautier Paulin, Xavier Boog, Anthony Boissière and Sébastien Pourcel all agree to race the Motocross of Nations this year.

“I was travelling a few weeks ago to Thunder Valley where I met Christophe Pourcel, and after our meeting he will be riding a 450 if he is in the final selection. With the new rule concerning the age limit in the MX2 class, our rider in this category will be Marvin Musquin, Steven Frossard or Gautier Paulin. The final selection will be revealed in Loket,” explained Olivier, who examined the track of Thunder Valley during the US National series.

“I think that this track will suit better than Budd’s Creek – home of the 2007 Nations – to the European riders. The ground is a little bit sandy and it’s a ‘traditional track’ which is a little bit narrow in some places, but they will improve it. The location is really nice as the track is near a mountain and the main problem will come from the fact that we are at an altitude of 1600 meters.

“The engines will probably lose some power, and we’ll be in the area on Thursday 23rd of September to do our first testing sessions; the fact that the event is organised in the US is more difficult for us on a logistical point of view, but we’ll have the support of ‘Le Top Racing’ which is a French structure based in California. Our goal is to do at least as good as last year,” said the French trainer.

On the podium during six of the last seven editions of the event, and runner-up behind the American team in 2007, 2008 and 2009, the French team looks stronger than ever.

Sébastien Pourcel (450 Kawasaki KRT): 25 years old, actually injured and 16th in the MX1 World Championship. Winner of four MX1 GPs and winner of one heat during the 2008 Motocross of Nations; member of the French Team in 2004 (third in Lierop, Netherlands), 2006 (fifth in Matterley Basin, Great Britain), 2007 (second in Budd’s Creek, USA) and 2008 (second in Donnington Park, Great Britain).