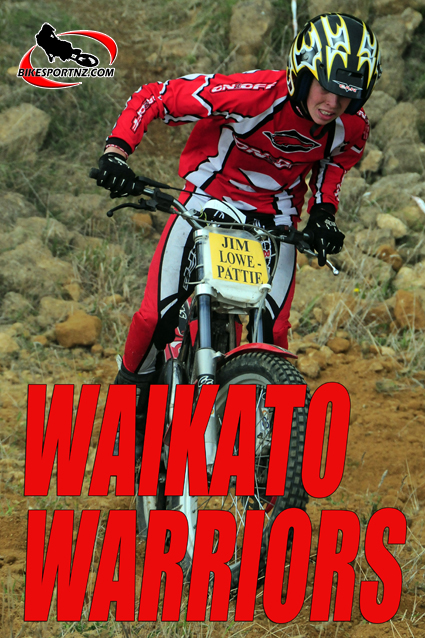 Rounds five and six of the North Island Moto Trials Championships near Hamilton this weekend will be make or break time for title hopefuls.

The Beta Novagar-sponsored series kicked off in Taranaki in March and continued with competition near Hastings and Havelock North in April. This weekend the riders flock to compete at two venues near Hamilton.

“Day one is classic Wharepapa South limestone rocks. Terrain for day two is at Livingstone’s property and it in a rocky stream bed, it includes tree roots and banks,” said event organiser Robbie Bennett.

There’s no looking past Kiwi internationals Jake Whitaker (Wainuiomata), Karl Clark (Nelson) and Warren Laugesen (Levin) to take the limelight in the elite Experts’ grade this weekend as they reignite their battle for top honours.

Whitaker won the experts grade at all four rounds thus far, with Laugesen forced to settle for second overall and Clark is holding third spot.

Laugesen is a seven-time former national champion and determined to topple current No.1 Whitaker, but the Wainuiomata rider has been virtually untouchable, in scintillating form throughout the series so far.

Tauranga’s Jim Lowe-Pattie will definitely be one of the top riders to watch out for in the A grade competition.

Lowe-Pattie (pictured above) won the intermediate class last season but has now stepped up to the A grade and proving himself a fierce and very capable competitor. Lowe-Pattie won the A grade in Taranaki in March, ahead of New Plymouth’s Matt Foster and Wellington’s Carl Robson, and dominated again at rounds three and four in Hawke’s Bay, winning ahead of enduro ace Rory Mead (Whitby) and Taranaki’s Foster respectively.