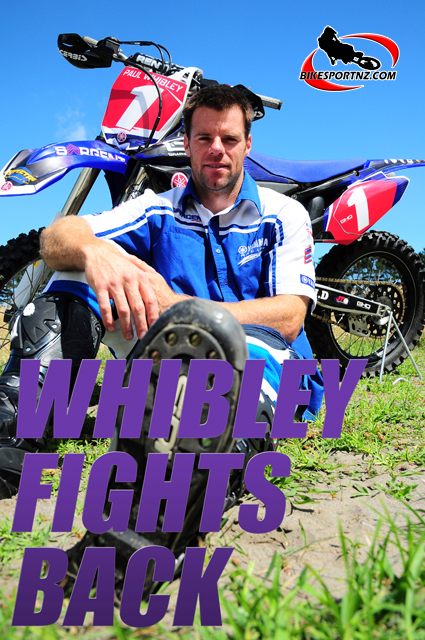 New Zealand’s Paul Whibley is clawing his way back to the top in the United States.

The man from Pahiatua managed a runner-up finish at round six of the Grand National Cross-Country Championships (GNCC) in Yadkinville, North Carolina at the weekend, lifting him from fourth to third spot overall in the series.

As far as the championship is concerned, Whibley is now just 25 points behind his own Yamaha team-mate Charlie Mullins – who won the race at the weekend — and he is 44 points behind series leader Josh Strang (Suzuki), who crashed out of the weekend’s race and was eventually credited with a disappointing 16th overall, and ninth in the XC1 class.

“I’m pretty happy with second,” said Whibley, who carries the No.1 plate on his Yamaha after winning the XC1 championship for the first time last year.

“It was a good day; I was back up at the front and I was racing with the leaders,” he said.

“Midway through the first lap I caught Josh a little and could see him in the tight section. When we came out into the dusty sections again I wasn’t close enough to see through his dust and dropped back.

“My team-mate Charlie Mullins had also caught me in the tight section. Charlie is one of the best riders I’ve seen go through tight trees and he threaded his YZ through the pines with amazing speed.

“Later in the lap I washed the front end out and Charlie slid past taking second position. I pushed as hard as I could but couldn’t make any ground up on the leaders.

“At the end of the second lap I came across Josh (Strang) lying on the side of the track. He had obviously gone down hard and hadn’t moved far. I stopped to see if he was okay. He wasn’t moving much but he said he was okay but hurt.”

In the end it was a Yamaha 1-2 with Whibley catching up the time lost following his stop to check on Strang, but he was still unable to reel in Mullins.

The win meant Mullins made it his second straight victory in the series after he’d also won the round five event in Tennessee last month.

Mullins cashed in on a good start in North Carolina, working his way from fourth after the start to first by the end of the second lap. From there, Mullins needed only to keep it on two wheels and between the markers and the podium top step was his.

In the meantime, Strang was happy to be leaving North Carolina with the points lead intact after his frightening second-lap crash left him dazed and sore.

At the time the young Australian was leading the race after grabbing the holeshot.

“I got sideways over a little jump in the woods and I clipped a tree and my hand went off the bars and when I grabbed on again I got a handful of throttle and it shot me into a tree,” said Strang. “I went down pretty hard and it rang my bell.”

Mullins inherited the lead at that point, with Kiwi hero Whibley taking over second. Another Australian, Glenn Kearney, wrung out the little Husqvarna 250 TXC to move into third, nearly catching Whibley on the final lap.

At the finish, Mullins took the win with Whibley in second and Kearney in third.

“I’ve had two good weekends in GNCC and my confidence is high right now,” said Mullins. “I’m happy with how things went today and how I rode and I just want to keep doing what I’m doing.”

Fourth place went to KTM’s Chris Bach, who got shuffled to the rear after getting off to a good start. Bach fell on the first lap and bent his clutch lever, but eventually picked up the pace when Yamaha’s Barry Hawk Jr. passed him.

Bach moved from ninth at one point to fourth, passing KTM’s Nate Kanney on the final lap.

Kanney finished fifth, just ahead of team-mate Cory Buttrick and Hawk. Strang managed to get back in the race after a brief period in the pits and salvaged a ninth place finish, sandwiched between Kawasaki riders Jedediah Haines and Eric Bailey.

Despite the ninth place finish, Strang still holds a 19-point lead over Mullins after six rounds, 157 to 138, while Whibley sits in third with 113.