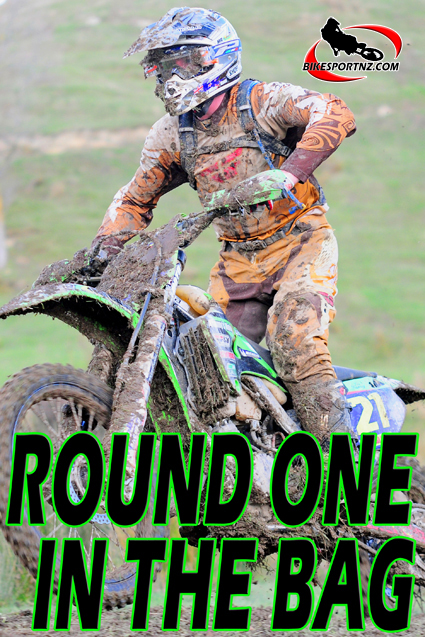 Gisborne’s Shaun Fogarty was the big winner at round one of the North Island Cross-country Championships at Waipu Caves at the weekend.

But he left his charge quite late, having to catch and overtake early leader Luke Ramsey (Kawasaki KX250F) late in the race to do it.

However, Dickey secured the win in the two-stroke over-200cc class and showed that he is definitely a contender for the overall this year.

The senior three-hour race that followed was a real nail biter, with the lead changing lap by lap for the first hour, Michael Vinning of Huntly (RMX450) led the charge with Mokau’s Adrian Smith (YZ125) hot on his heels and Ramsey close behind.

A pit stop by the leaders saw Ramsey take the advantage and he tried to distance himself from the pack.

Smith took the advantage in the tighter bush sections and, by the two-hour mark, he had closed the gap and made the pass on Ramsey coming into the pits, only to hit a post and pick up 100 odd metres of wire which wrapped around his rear wheel, bringing him to an abrupt stop.

Smith spent 15 minutes unraveling the mess before he could continue, leaving Ramsey to fend off another spirited charge from Vinning and hard charging motocrosser Fogarty (KTM450).

Fogarty had come from a poor start and was putting down some very fast lap times only disadvantaged by having to fuel every second lap.

Luke maintained the lead up till the penultimate lap when Fogarty made the pass and with the hot and rough conditions his superior fitness gave him an 8 second buffer over Ramsey to the finish flag.

A class win for Ramsey, along with second overall was just rewards for some very good racing.

Te Kauwhata’s Jason Moorfield (KLX450) started well and held his own in 4th until some scary moments made him back off and settle for 8th overall and a well-earned win in the Vet 35–45 class.

Cam Downing (KX125) also started well and showed exceptional speed, running top three in his class until an untimely crash at the half way point saw him limp to the end of the race to gain valuable points within the class to finish 6th.

Unfortunately the Metalman Team was unable to be entered in the teams’ section as Norsewood’s Kevin Hermansen (KX250F) recently suffered an ankle injury. He is expected to be back for duty at the next round at Oparau on March 14.

Individually all the Metalman team riders attending round one are in a strong position — Ramsey now believes he can not only contend for the 0–300cc 4-stroke class but also the overall; Moorfield moves to a new KXF450 for the remainder of the series and with one win already under his belt his sights are set on winning the Vets and securing a top 10 overall position.

Downing will put the first round behind him and it’s certain he will be there to fight for a podium result this year.

Both the team manager Mike Ramsey and team owner Kim Herbert are very excited about how the team has progressed and also look forward to building a good relationship with Moto SR’s Ritchie Ebbett who has recently come on board to assist the team with suspension using RG3 technology.

“In these difficult times it is fantastic to have great support from our sponsors” said Herbert. “Working with Ritchie will give the boys that little extra that could make all the difference.”

Round two of the series is only two weeks away.