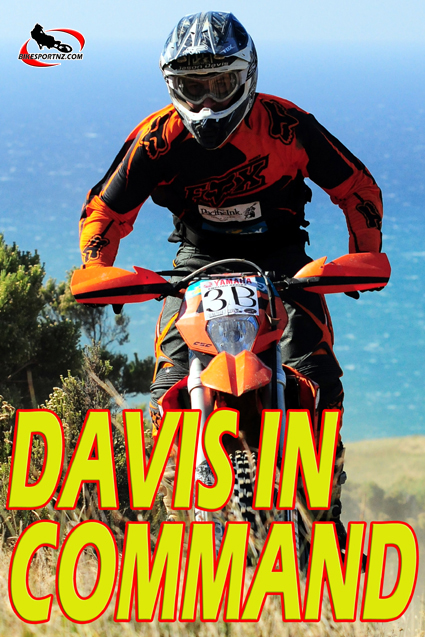 The see-saw battle for New Zealand enduro championship honours has taken another turn and now it’s Whangamata’s Jason Davis who has tilted the balance of power his way.

Auckland’s Chris Birch won round one of the Yamaha New Zealand Enduro Championships at Kawhia in January, Davis won round two at Whangamata in February and Birch won round three in the Riverhead Forest, near Auckland, a fortnight ago, but it was ‘Mr Consistent’ Karl Power, of Auckland, who led the series.

However, it was Davis who won again at the fifth round of five at Akitio, east of Dannevirke, on Sunday, creating an eight-point buffer over Power at the top of the standings.

Davis (KTM 450 EXC) won the day from Mokau’s Adrian Smith (Yamaha YZ144) by the narrowest of margins, just five seconds to separate the pair after nearly five hour’s and 141 kilometres of brutal riding on the steep farmland at Akitio, on the Central Hawke’s Bay coastline.

Suffering from the flu and also the victim of a bone-crunching crash, Power (Honda CRF250) managed to finish just sixth on Sunday.

With just one round remaining, near Taupo on June 5, the 21-year-old Davis just needs to maintain his momentum to secure the outright title in this year’s series.

“It was my first New Zealand enduro on the 450cc KTM,” said Davis. “I’d been riding one in Australia but not here. It was tough to switch back and forth from a 250cc two-stroke to a 450cc four-stroke all the time, so I’ve decided to stay with the bigger bike.

“I just need a good run at Taupo now.”

Although Smith’s ride was certainly impressive, taking his 144cc two-stroke bike into battle against the 450cc four-stroke bike of Davis, he is not in the running for the outright crown – he was forced to skip the previous round of the series because of wrist injury.

“My wrist is very sore now but I had so much fun today. It was my first ride on the YZ144. I’d only ridden it for an hour before today, just to run in the engine, and it was brilliant.

“I’m surprised I finished second today, especially on the small bike, but it handles so well in the tight stuff.”