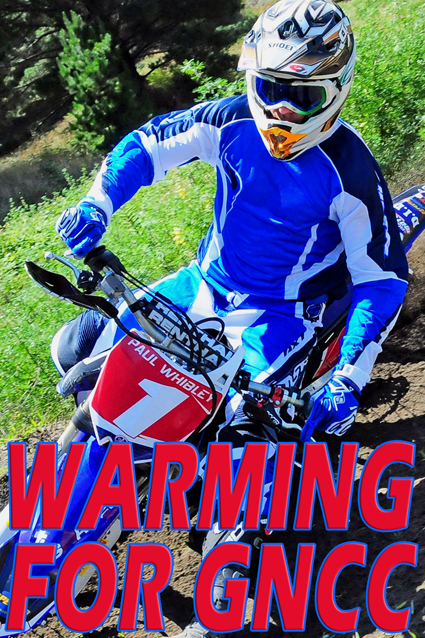 Paul Whibley‘s own Yamaha team-mate may turn out to be his biggest threat this season.

The Pahiatua rider — national No.1 on the United States cross-country race scene — battled his American Am-Pro Yamaha team-mate Charlie Mullins throughout the first of the season’s “warm-up” races at the weekend.

Whibley and Mullins were using the SETRA Harescramble race in Abbeville, South Carolina, to sharpen up their fitness and skills ahead of the start of this season’s US Grand National Cross-country (GNCC) Championships.

In the end, it was the 23-year-old Mullins who took the chequered flag, with the Kiwi racer eventually forced to settle for second spot.

“Arriving at the Am-Pro base just days before and with an incredible spell of wet and cold weather for this time of year meant the event was going to be more testing than racing for me,” said Whibley.

“Lining up ready for the wave of the flag, I was still unsure of the best technique required to start the bike fast. As a result I got a bad start and had a lot of work to do. Charlie Mullins got to the front quickly and simply took off.

“The track was tight and passing was tough. It wasn’t until about half way through the first lap that I was able to move into second and, by that time, Charlie was out of sight.

“With one lap completed in just over 30 minutes, I got a pit board saying to gas on the next lap. We were told at the briefing that it would be a five-lap race, so race time was going to be just over two-and-a-half hours.

“As the race progressed, I became more familiar with the bike and was able to increase my speed and reduce my lap times, although there was no catching Charlie.

“The track was cutting up and I was enjoying being back in some tough woods after being home in New Zealand over the off-season. With the last lap completed Charlie took the win. I was happy with the progress we had made and satisfied with the result.

“Dale, my new mechanic, had done a great job of prepping the bike and things are looking good for the coming season.

Viewing lap times after the race showed I got more comfortable as the event progressed and even put in the fastest lap of the race on the last lap.”

Meanwhile, a runner-up finish at the weekend is no cause for concern for Whibley.

The GNCC series kicks off in Florida at the end of this month and that’s when Whibley hopes he’s top of his game as he begins the defence of his No.1 title.