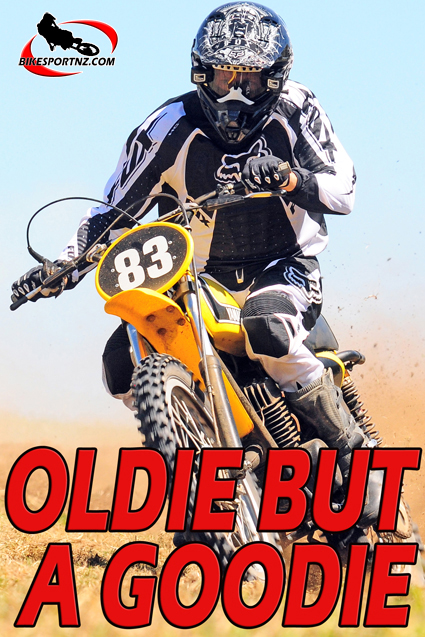 With a combined age of 76, you probably shouldn’t expect too much out of Taranaki’s Stan Jones and his old two-stroke Yamaha MX360A.

Jones is a 40-year-old machinery operator at Fonterra and his bike is a yellow 1974-model motocross machine, but together they were still capable of winning races at the third round of five in the national Vintage Motocross (VMX) Championships near Inglewood on Sunday.

Jones convincingly won the day’s first of three Pre-75 open class races but dropped valuable points when he ran out of petrol in his second outing.

“I forgot to top it up,” he shrugged.

It was a great battle in the day’s final race with Jones and Steve Gallichan (1974-model Maico GP440) battling out in front, with daylight back in third place. Gallichan eventually took the win.

“I’ve only had the bike 12 months,” said Jones, also a qualified bike mechanic. “The man who owns it asked me to restore it for him … it was in bits and pieces … and the payback for me is that I get to ride it at VMX events like this one.

“I used to race quad bike until about 1997 but then someone introduced me to vintage motocross and I haven’t looked back since.

the bike may be 36 years old but it still goes strong. All I have to do is keep the filter clean, change the oil once in a while and change the plug from time to time.

“This Yamaha is nearly as old as me and it will probably still be racing long after I’ve given up.

“To be honest, I wouldn’t know myself on a new model bike, with all the advances in suspension, frames and engines, but for an old bike this Yamaha still handles jumps very well, it steers well and still has plenty of power.”

Jones and his trusty old 1974-model Yamaha MX360A will be out on the track again at round four of the series, set for Halcombe, in the Manawatu-Wanganui region, on March 21.