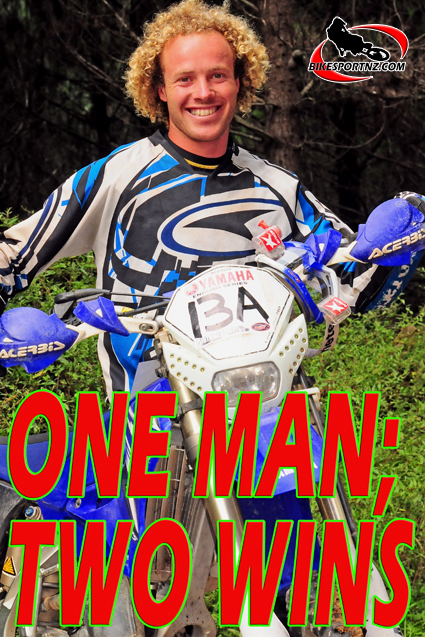 One man, one bike, two events over two days, two different disciplines and two wins … it’s all adding up for Mokau’s Adrian Smith.

The 24-year-old Taranaki man raced his little Yamaha YZ125 to fifth overall against all the big bikes at round two of The Yamaha New Zealand Enduro Championships near Whangamata on Saturday, good enough to safely win his under-200cc two-stroke class.

“I had a big crash at round one of the enduro nationals so, after my result at Whangamata, I’m up to first equal in the series standings,” said Smith.

Smith then drove all the way back down the island to compete at round three of the Bushriders’ Motorcycle Club’s Cross-country Championships near Dannevirke the following day.

This time there was no heading Smith and his Yamaha as he took a comfortable overall win ahead of Napier’s John O’Dea, riding a Suzuki RM-Z450cc four-stroke bike.

“It was pretty trouble-free,” said Smith. “The bike was great. I had a two-minute lead by the end of the first lap at the cross-country on Sunday. I was able to cruise for the rest of the race.

“In  the end I did six laps … the course had a bit of everything but was probably a bit tighter than most cross-country races. It was quite slippery in places too.

“I’m loving this little bike and I’m looking forward to putting myself up against defending national cross-country champion Adam Reeves (of Pahiatua) this weekend. He rides a 450 four-stroke Yamaha, so that will be interesting to see how my 125cc Yamaha challenges him.”

This weekend is round one of the North Island Cross-country Championships at Waipu Caves, north of Auckland, so Smith had another long journey to contemplate as he tackles the cream of the nation’s dirt bike racers.