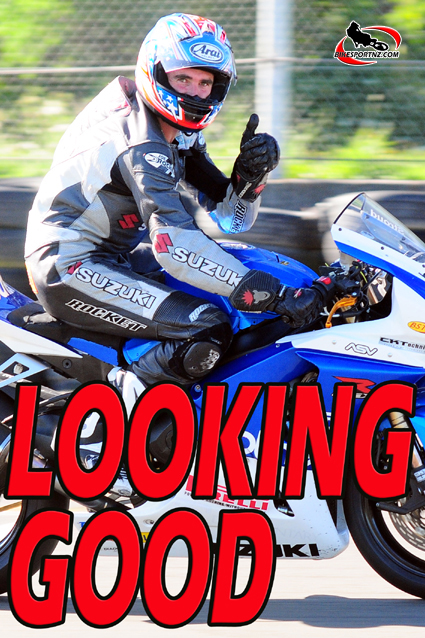 Hamilton’s Andrew Stroud is possibly less than two races away from reclaiming the New Zealand superbike crown he last held four seasons ago.

The Brother Suzuki rider raced to two commanding wins in the class at the weekend’s fourth round of five in this year’s Castrol Power 1 New Zealand Superbike Championships at Feilding’s Manfeild race circuit.

Stroud’s double race victory in the Manawatu on Sunday means the 42-year-old has stretched his lead to 43 points over the defending champion, Brisbane Suzuki rider Robbie Bugden, with just 50 points still available, at the fifth and final round at Hampton Downs, near Meremere, in March.

Stroud’s massive points advantage came about thanks to two key factors – his own fantastic talent on a motorcycle and the incredible bad luck that struck main rival Bugden when his bike mysteriously ran out of power nine laps into the 14-lapper and he was forced to withdraw.

“Winning was what I had in mind coming here and that’s also what I plan to do at Hampton Downs. I can afford to settle for seconds and thirds now but I wouldn’t be a real racer if I was happy to do that,” said Stroud.

With Shirriffs finishing 3-2 at Manfeild, he has moved to third in the championship standings, with Christchurch Suzuki rider James Smith slipping to fourth and Fitzgerald remaining in fifth spot.

It was bad luck all around for Smith as he also lost his grip on the lead of the other class he is contesting, the 600cc sports production class.

Hamilton’s Nick Cole (Kawasaki) was one of the beneficiaries after Smith and Wellington’s Glen Skachill were each penalised 20 seconds after allegedly jumping the start of race one.

That decision by track officials elevated Cole from fifth to third in race one. Cole backed that up by placing fourth in race two, that battle abbreviated to just three laps following a serious crash.

So, finishing 3-4 on the day was enough for Cole to zoom into the championship lead, now 6.5 points clear of Smith.

“This was a better weekend for me that I had expected,” said Cole. “Manfeild is not one of my favourite tracks.”

The day’s outright winner in the class was Inglewood’s Midge Smart (Yamaha), making his first appearance in the championship and stunning with his 1-2 results.

The battle for formula three honours continued between Manawatu friends and rivals Glen Williams (Suzuki) and Jason Easton (Tigcraft Aprillia), with defending champion Williams edging further ahead in the championship chase thanks to his 1-2-1 results.

Easton had to settle for 2-1-2 at Manfeild and was disappointed to learn he is now 16 points behind Williams with just the final round to come.

Dannevirke’s Geoff Booth (Suzuki) was untouchable in the 650 Pro Twins class, winning all three races in the class at Manfeild. He is now 36 points ahead of Christchurch’s James Hoogenboezem (Suzuki).

Meanwhile, Hoogenboezem’s bother, Alastair (Honda), overcame problems racing without a foot-peg when it fell off on his warm-up lap before race one in the 125GP class on Saturday, still managing third place and then bouncing back to win both his races the following day.

He is a massive 90 points in front of teenage Auckland girl Avalon Biddle (Honda).

In the sidecars class, Wanganui men Stephen Bron and Dennis Simonsen (Suzuki) finished 2-1-1 at the weekend, further boosting their lead in the championship.

Leading standings after round four of the Castrol Power 1 New Zealand Superbike Championships at Manfeild on Sunday: