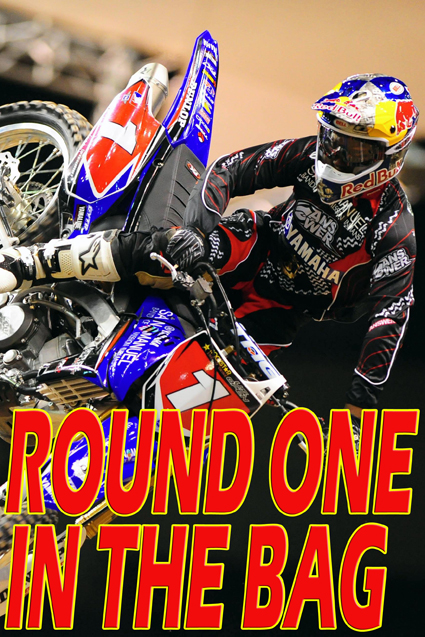 James Stewart is on his way to a successful US supercross title defence.

The Yamaha star won the opening round of the 2010 Monster Energy AMA Supercross (an FIM World Championship) after an exciting, come-from-behind ride in front of more than 43,000 at Angel Stadium, California, on Saturday night.

Meanwhile, Kawasaki’s Jake Weimer opened the Western Regional AMA Supercross Lites championship with a big win and he is the class’ points leader.

At the end of the first lap, Reed, who finished second in the championship last year, pulled off the racetrack after colliding with new Suzuki signing Austin Stroupe.

Reed was attempting a pass on Stroupe for fifth place when the two collided.

With several of the front wheel spokes completely broken, Reed had no choice but to retire from the race and hand over his damaged factory Kawasaki to his mechanic.

Reed immediately expressed his short lived disappointment with the way his season had started to the race commentary team whilst vowing to return to the podium at round two next week.

“This was not the way I had planned to start 2010,” Reed said. “I missed the start but was up into sixth and trying to make something happen when Austin Stroupe turned into me.

“It was a pretty big hit, his foot-peg ended up in my front wheel and sheared the spokes out of it. From that moment there was nothing I could do to continue racing, the bike was unrideable and no longer safe.

“The critics will see a round DNF as a massive blow to my championship but it won’t be. Remember this is a long championship where anything can happen and everyone will have a bad week. I will just stick to my simple plan which is to win races and let the championship come,” Reed stated.

“I was just at the wrong place at the wrong time,” said Reed. “The pace is really high right now, and there was nothing that I could do. I was trying to pass another rider and our lines came together.”

But the race continued and Stewart trailed Dungey by over four seconds until lap 17 when he made a pass for the lead and eventual win. Dungey tried to answer back on the final lap of the race but Stewart held him off for his seventh win at Angel Stadium and the 37th of his career. Dungey finished second and Honda’s Kevin Windham finished third.

“I stayed consistent throughout the race,” said Stewart. “I started to push myself during the last 10 laps and that is what racing is all about. I wanted to be there at the end and I was.”

Dungey, who is the defending Western Regional AMA Supercross Lites class champion and raced a handful of premier class races back in 2008, is competing in his first full AMA Supercross class season.

“It was amazing,” said Dungey. “I had a few bobbles, and I am here learning. There is always another race. No excuses, James rode a great race, and this was a fun debut for me.”

At the end of lap one, Hansen slid out after the finish line and dropped to seventh place. Hansen’s mistake allowed Suzuki’s Ryan Morais to move into second place.

“It feels good to have the first one done now,” said Weimer. “I rode smooth, and I did not make any mistakes. For right now, it is weekend to weekend, and the goal is to win races.”

Monster Energy Supercross heads to Phoenix’s Chase Field next weekend for the second stop on the championship circuit.

Video action from the night: