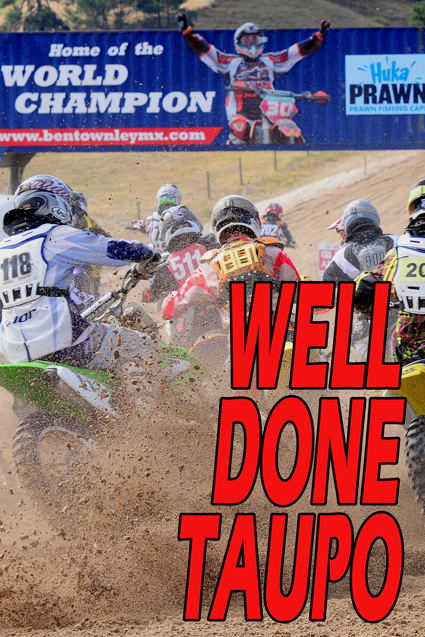 The Taupo Motorcycle Club has been judged the supreme club in the Waikato district winning the ‘Club of the Year’ Award at the recent Waikato Sports Awards.

In the last year, the innovative club has hosted the RoadCraft Junior Motocross World Championship, the 2008 Swann Insurance International, the Kawasaki KTM New Zealand Junior Nationals, its annual Labour Day round and its ever-popular Winter Series of club rounds.

“To host three large events in the past year, including the Junior Motocross World Championship, was a fantastic effort by all of our club members, and to receive an accolade like this is icing on the cake,” said Geoff Hall, President of the Taupo Motorcycle Club.

All clubs that were named as regional winners were put forward to the Waikato judges who chose six as finalists with the Taupo Club receiving the highest accolade.

“Our mission is to provide an opportunity for New Zealand’s young riders to compete at the highest level possible, which we achieved with the Junior World Championships – it was the first time that the event had left European shores and we were delighted to attract such a high calibre of riders who put on a fantastic riding display for the 10,000 spectators,” said Hall.

“The Club is determined to continue to provide opportunities for New Zealand riders and to grow motocross as a sport – we have proven we have a team and a track capable of hosting events at a high international standard, and we will continue to seek opportunities to do so,” said Hall.