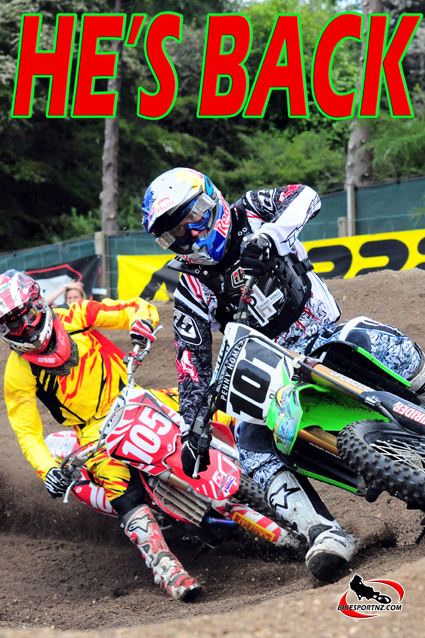 The 25-year-old former motocross world champion (pictured above) is fast heading towards full fitness again after an enforced layoff due to injury and he can now probably claim he’s a lot closer to 100% again after winning the main class at Monday’s big event near the coastal Bay of Plenty town.

Tauranga’s Townley (Penny Homes Kawasaki KX450F) battled a tenacious Michael Phillips, of Rotorua, throughout the opening laps of the day’s first race at Whakatane and, when Phillips struck problems with his Honda, Townley was unchallenged as he rode on to take the chequered flag.

It was Townley’s first major victory since he had crashed to the sidelines at the Motocross of Nations in the United States in September 2007 and his jubilation at winning again was evident as he punched the air.

He finished runner-up to Phillips in the next outing and then saved his best for last, snatching the win from Phillips on the last lap of the day’s final race.

“And, besides that, I didn’t think Mikey (Phillips) could keep up that pace at the front. I knew Phillips was at least as tired as me, so I pushed hard over the last few laps and, sure enough, I could see him starting to change his lines and ride defensively.”

Townley dived under Michael Phillips halfway through the final lap and that was enough to break his rival, Townley so far in front by the last corner that he could slow as he approached the chequered flag, savouring the joy of marking his comeback with an outright win.

“It’s a good feeling to come back and have such a good result,” he smiled.

Townley will next race the New Zealand Supercross Championships series before taking his Kawasaki KX450F to race the annual Woodville Motocross GP at the end of January. Then he heads back to the United States where he will pick up the pieces of his shattered career.

Townley rode a Kawasaki KX250F to take the East Coast Lites Supercross crown in the US in 2007 but has been unable to compete at the top level since the end of that season.

Monday’s big win at Whakatane surely showed that Townley is on his way back to the top.

Otago’s Courtney Duncan (Yamaha) followed on from her complete dominance of her junior class on Sunday by scoring another hat-trick on Monday, this time in the women’s category. Runner-up in the women’s class was Rotorua’s Melissa Patterson (KTM), with Taupo’s Alex Dillon (Honda) third overall.