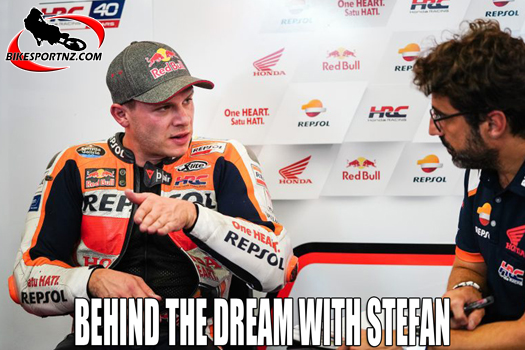 German rider Stefan Bradl is the topic of this episode of Behind the Dream, a brutally-honest short documentary series created by the Honda factory.

The German rider analyses the duality of his career with his father’s, his Moto2 title, his rivalry with fellow Honda star Marc Marquez, a trying time in WorldSBK and discusses stepping away from racing to focus on his crucial work inside the HRC Test Team.

This is how Stefan Bradl recognizes everything that life has given him. A Moto2 World Champion in 2011, a MotoGP rider, a TV commentator and presenter, current Test Rider for the most successful brand in motorcycling racing and a family man.

Born in Augsburg on November 29, 1989, his serious appearance often hides a great sense of humour and an analytical mind – the perfect head to lead one of Honda HRC’s most important departments – the Test Team.

“It’s really difficult to have a good test rider because he needs to be fast,” says Marc Marquez on the rider who has replaced him on seven occasions in 2022, adding “But, if he is too slow, then he is not testing the things like we want. He needs to be precise with his comments, he needs to be concentrated.”

These are the main characteristics that a rider like Marquez is looking for in help evolve the bike while the factory works away in private.

“I went to WorldSBK and this was one of my biggest mistakes I’ve made in life. I suffered that year like crazy,” Bradl sadly remembers during his year in WorldSBK, he and his team were rocked by the tragic death of Nicky Hayden. Bradl found himself at a crossroads, not knowing where to head with his career or his life.

Fortunately, he received a call from HRC technical manager Takeo Yokoyama, who offered him the possibility of starting from scratch together with a new structure for the European project of the Test Team. Stefan had no doubts and accepted this challenge that he continues to work on five seasons later.

“Sometimes I am switching,” says Bradl, who in the last three seasons has unfortunately not been able to focus on the development of future prototypes due to Marquez’s series of serious injuries to his right humerus.

“The plan is to understand that now you are a racer,” Alberto Puig, HRC team manager, told Bradl the day he got back on the RC213V last June in Barcelona, “and this completely changes the mentality and the approach.” Marquez returned to the operating room for the fourth time in the United States and the following months saw Bradl back in the Repsol Honda Team box.

“Ten years ago I would not come to this room, I would say ‘wrong address’” Bradl reflected while sat inside the office of Marc Marquez, an image of the #93 and his team looming over the German’s shoulder.

But the great rivals of yesteryear have matured, they have won championships in the other categories and in recent years their lives have crossed, sharing great respect for one another.

Bradl now enjoys a great relationship with the entire Marquez team, who were his fierce rivals in 2011, but he does not hide from recognising how hard the Spaniard’s arrival in MotoGP was: “I was jealous when Marc came to MotoGP.”

Stefan was determined to beat Marquez, but finally had to accept that Marc “was way faster.”

A completely open and honest Bradl continued, “I had no answer, how can I be faster than this guy?” he wondered when he was racing for the LCR Honda team.

The Moto2 champion was trying to understand the situation but was unable to comprehend how someone younger could come straight to MotoGP, to the factory team and win the title in the year of his debut, someone with whom he had been fighting for a world championship just a few seasons ago.

“It was tough, very tough. Marc destroyed me.”