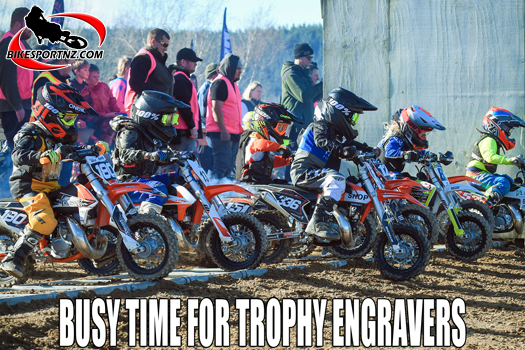 The trophy engravers will be working overtime after the 2022 edition of the New Zealand Mini Motocross Nationals wrapped up in Tokoroa at the weekend.

And the jewellers may as well get templates made for the recipients too, as they’ll no doubt be etching some of these same names into silverware again in the near future.

Talent certainly abounded at the Lucas Oil Motocross Park at Amisfield, on the outskirts of Tokoroa, for this year’s two-day Un4Seen Decals-sponsored event, catering for riders aged between four and 11 years and riding bikes with engine capacities anywhere between 50cc and 140cc.

With an impressively-large entry list and intense racing at the weekend, it showed the sport in a positive light and showed it was extremely healthy at this grassroots level.

The mini nationals is considered a nursery ground for those starting out in motocross and who knows where that might lead.

Taranaki’s Shayne King, who was the 500cc motocross world champion in 1996, is one man who knows better than most and he, as he looked over the racing at Tokoroa on Saturday, he remarked “this is where world champions are made”. 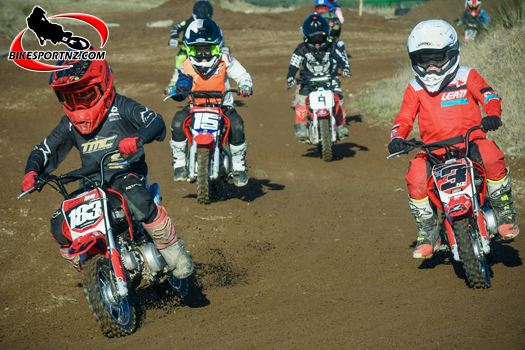 “These are the first steps on the pathway to becoming a world motocross or supercross champion,” he said.

“At the mini motocross nationals they’re all young, they’re learning, the sport is exciting and everyone turns up with the big trailers, the atmosphere is buzzing, the track is amazing and you can measure yourself against all the best rising stars in the country.

“Riders come here from all parts of the country, the North Island and the South Island, and the turn-out is probably even bigger than the senior nationals.

“I never had a chance to ride the minis when I was their age … it wasn’t a thing back then. I did start riding at the age of three, but couldn’t compete until I was aged eight and that was on 85cc bikes. Today they can start as young as four and race on 50cc bikes. Those early years can be a real boost to the learning process.

“The opportunities are available today and it’s great to see so many young riders taking advantage of that.”

Perhaps an international podium somewhere is where we may see Kiwi youngsters such as Levi McMaster, Jaxx Hunter, Flynn Roskam, Austin Vining, Vinnie Edwards and Cameron Travers standing proud in the near future.

Final leading overall standings in the 2022 NZ Mini Motocross Nationals at the weekend: 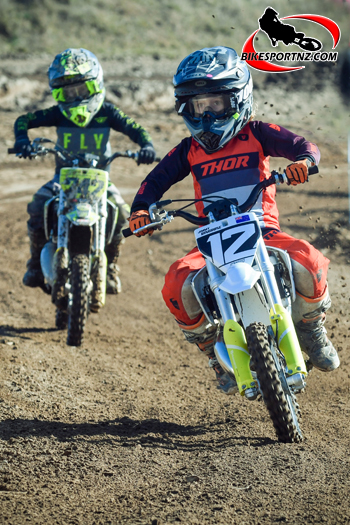 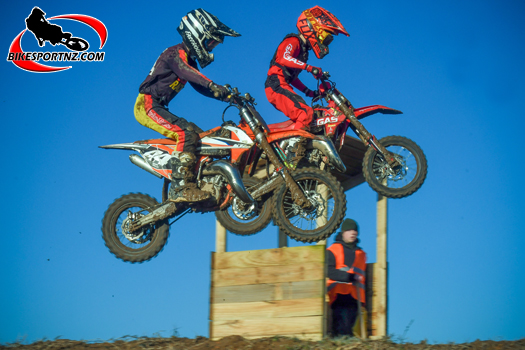 Matamata’s Henry Millar (No.44) and eventual champion Austin Vining, from Te Kauwhata, share the airspace over Tokoroa in this 7-8 years’ 65cc class race at the weekend. Photo by Andy McGechan, BikesportNZ.com