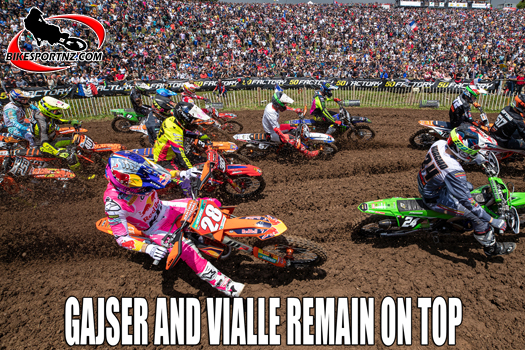 MXGP made the first of two visits to France this season with the tenth Grand Prix of 2022 taking place on the immaculate hillside course of Ernee.

HRC Honda’s Tim Gajser extended his MXGP class championship points lead, even with his 5-4 results at Ernee, and Red Bull KTM Factory Racing’s Tom Vialle rode to victory in MX2 in front of his home fans.

MXGP made a long overdue return to the first-class racing facility at Ernee in northern France at the weekend.

A bumper attendance braved early summer storms in the build-up to the GP and also through practice and qualification on Saturday that turned the clay-soil into a series of long, tough and punishing ruts and bumps.

Frenchman Vialle rode his KTM 250 SX-F to second position during the qualification heat and two top-five starts on Sunday allowed the 21-year-old to make a strong bid for another trophy.

He fought off the attention of title rival Jago Geerts to take a popular first moto win and recovered quickly from a brief fall in the second race to place 3rd.

The combined tally was enough to walk the top of the rostrum. The 1-3 results meant Vialle’s ninth podium from ten Grands Prix, sixth win from the last eight and ninth moto triumph: at least one from the last seven rounds. His cushion in the championship is now 11 points.

DIGA Procross KTM racer Liam Everts, a rookie who has been progressing with some bright performances on the edge of the top five in recent meetings, steered his KTM 250 SX-F to 6th overall with a 6-7 score.

After back-to-back Grands Prix in Spain and France, MXGP makes it a triple with the journey to Talkessel in Teutschenthal, Germany next weekend.

Vialle, 1st and 3rd for 1st overall in MX2 said afterwards: “It was an amazing weekend for me. It started out tough with the qualifying race on Saturday but 2nd position was quite safe for the starts today with the inside gate. I wasn’t riding that freely in the first moto but the fans were unbelievable and pushed me every lap and all the way.

“In the second moto I had a small crash behind Jago and with the three of us leading and really going for it. I knew when I fell in a muddy section that I wouldn’t catch Jago and Thibault again but I’m really happy to take the overall here.”

Meanwhile, in the MXGP class, Team HRC’s Gajser increased his lead in the 2022 MXGP championship by seven-points after a strong, charging performance.

After Saturday’s qualification, Gajser was given 22nd gate-pick and although the Ernee start is a bit more wide-open than other tracks, he still wasn’t able to overcome that disadvantage and get through the first corner cleanly.

Instead, he had to remount in 16th place after being collected up in a multi-rider pile-up.

Putting his head down, he was soon inside the top 10 and moving forward almost every lap. With a quarter of the race left, he was closing in on the top three and given the speed he was carrying, he would have made those passes. Unfortunately, a small tip-over cost him valuable time and he instead had to settle for fifth.

Race two was a little better as he stayed upright but he was still in around 15th place as they rounded the first corner.

However, on lap one, he was able to make a lot of passes and crossed the line in eighth place. Once again, he moved his way through the field, posting the fastest lap time of the race in the process and was soon challenging again for the podium spots, only to make a similar tip-over which cost him time and the chance of a race and overall podium spot.

Instead, he finished with 34-points, joint-third but losing out on the second moto tie-breaker. However, it was still seven more than his nearest championship rival so his lead has gone back up to 73.

“I’m a bit disappointed with those late moto crashes in each of the motos, which cost me a couple of places, but overall, it was a good weekend after the difficult decision on Saturday and starting from the outside,” said Gajser.

“My championship lead is back up to 73-points and I finally felt that my speed was at the level it was before Sardinia. I know that my starts really hurt my overall chances, and then to crash in the first turn made things really difficult but I came through well and made a lot of passes today so that felt good.

“Next up is Germany which is a track I enjoy riding so I am looking forward to heading there and getting back on the podium.”

Next week, on May 11-12, is the familiar track of Teutschenthal, Germany in what is the third race in three weeks before the trip to Indonesia.