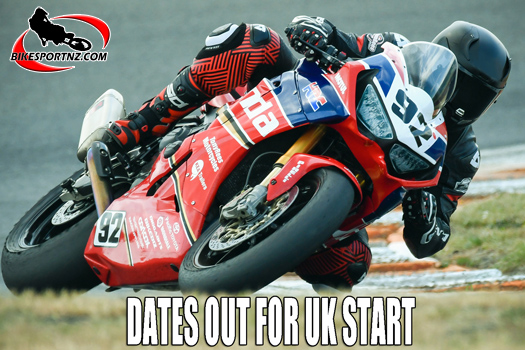 In news that affects two Kiwi racers – Whakatane’s Damon Rees and Wainuiomata’s Shane Richardson – the opening round of the 2021 British Superbike Championships is now to take place in May.

The start was temporarily delayed due to the latest COVID-19 Coronavirus pandemic lock-down in the United Kingdom and the series will now kick off on the second Bank Holiday weekend in May (29-31) at Oulton Park.

Series promoter MotorSport Vision Racing (MSVR) has made these changes to occupy dates that would have traditionally featured the major international road races. All other dates remain as per the previously published provisional calendar.

Richardson is now residing in the UK, but Rees is currently back home in New Zealand.

Rees had intended to head to the UK in February, but altered his travel plans because of the UK lock-down and took the opportunity to make a last-minute appearance at the opening two rounds of the New Zealand Superbike Championships this month.

After those two events, both at tracks in the South Island, he finds himself leading the NZSBK series in the premier Superbikes class.

Rees is 16.5 points ahead of his elder brother Mitch Rees and Rangiora’s Jake Lewis is third, 15 points further back, and with Christchurch’s defending champion Alastair Hoogenboezem and Taupo’s Scott Moir rounding out the top five.

Damon Rees expects he’ll be able to complete the Kiwi nationals calendar – with the final two rounds set for Hampton Downs on March 6-7 and Taupo on March 13-14 – before heading away to conduct bike testing in the UK ahead of the May 29-31 start to racing.