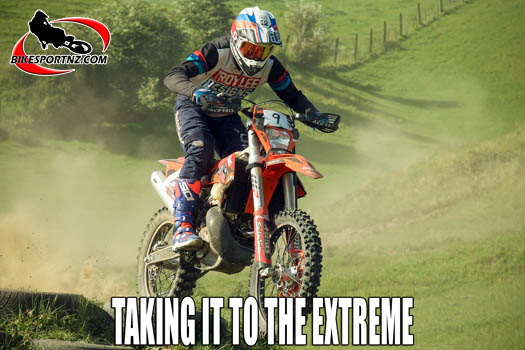 It was always going to be a KTM rider who finished on top, it was just a matter of deciding which individual it would be.

The 2019 New Zealand Extreme Off-Road Championship series went right down to the wire in the South Island at the weekend, with a two-day final showdown in Canterbury on Friday and Saturday.

The fourth and final round of the Yamaha-sponsored competition set a massive challenge for the nation’s elite enduro and cross-country riders, an enduro-cross at the Christchurch A&P Showgrounds on Friday, followed by the annual Nutbuster hard enduro at nearby Oxford the following day.

It had been a tight three-way battle for glory in the premier Gold Class at the earlier rounds, with Wainuiomata’s Jake Whitaker (KTM 300EXC), Helensville’s Tom Buxton (KTM 300EXC) and New Plymouth’s Tony Parker (KTM 300EXC) hogging the podium spots, although Napier’s Mackenzie Wiig (KTM 300EXC) did spring a surprise in winning round three overall in Hawke’s Bay two weeks ago.

Whitaker, a record eight-time former New Zealand trial champion who converted to the enduro dirt bike code just a few years ago, now regularly features among the elite of the enduro scene and it was he who eventually took the championship title this year, but it wasn’t easy.

He wasn’t even sure he’d done enough to win until moments after the final moments of racing on Saturday and he had needed all his magical skills from years of winning national trial championships to get him through the demands of the weekend. 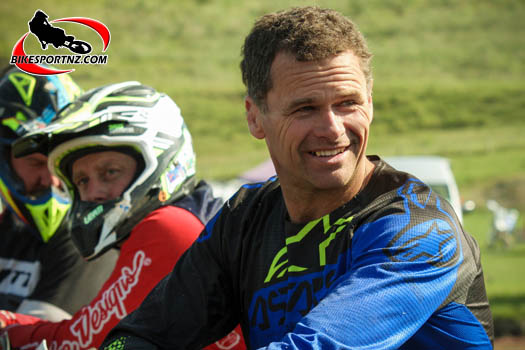 Christchurch rider Hamish Macdonald (Sherco 300), just returned from international duties and making his first appearance in this domestic series, won the enduro-cross on Friday, but most eyes were on the see-saw battle for championship honours between series leaders Whitaker and Buxton.

Whitaker enjoyed a meagre four-point advantage over Buxton at the start of the weekend, with Parker just five points further back, so any slip-up in Canterbury would be disastrous for any of these men.

Whitaker finished ahead of Buxton in Friday’s enduro-cross and this gave him confidence ahead of the next day’s Nutbuster extreme enduro.

But the racing the next day was perhaps even more intense, with virtually nothing to separate the two men on the hilly course.

Although Buxton did eventually finish ahead of Whitaker on Saturday, that wasn’t quite enough and so Whitaker narrowly took the national Extreme Enduro Championship title by just five points from Buxton.

Parker, Rotorua’s Bradley Lauder (Husqvarna) and then Hawke’s Bay man  Wiig rounded out the top five overall for the 2019 championship standings in the premier Gold Class. 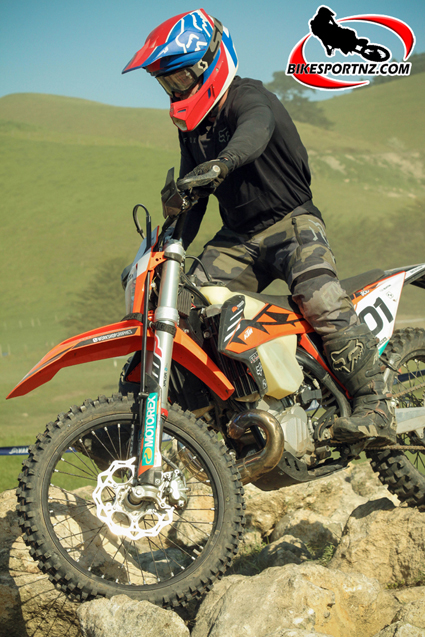 Helensville’s Tom Buxton (KTM), a title contender right up until the end of the last day. Photo by Andy McGechan, BikesportNZ.com

” I’ve been working hard to put a full series of results together for a while now and I’m stoked to finally get my name on a national title alongside some of New Zealand’s best,” said Whitaker, a 28-year-old furniture restorer and father-of-one.

“It has been a great series with tight racing and all of the rounds pushed us to our limits.

“It tough out in the hills on Saturday, with some extreme weather conditions. I’ve never ridden in such high winds, with some riders getting blown off their bikes, and then, when the rain hit, the down-hills became out of control. I managed to bend my rear disc on the second lap and had to push on with very little braking. I had some awesome battles with Tommy Buxton and we were swapping positions all day. I thought I had him until the last hill-climb that I mucked up.

“This is my first national enduro title and it feels awesome to win it.”

Riders nominated themselves as either Gold, Silver or Bronze class  competitors, depending upon their skill and fitness levels, and the battle for silver and bronze glory was equally fierce.

Only three of the four rounds of the championship were counted towards the final tally, with riders to discard their one worst score from the three North Island rounds.