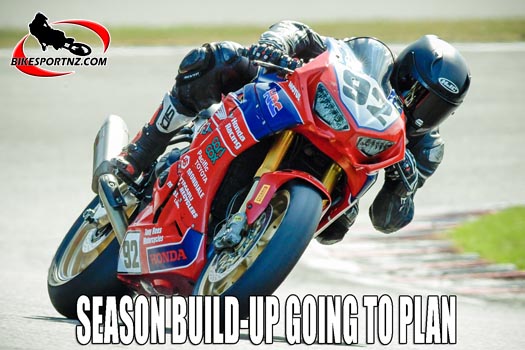 The brilliant build-up continues for Bay of Plenty brothers Mitch and Damon Rees as they race towards the start of a fresh New Zealand Superbike Championships season.

This victory was significant for the Rees siblings because Suzuki riders Moir and Mettam are also likely to be among their fiercest foes when the 2020 nationals kick off at Mike Pero Motorsport Park, Ruapuna, on the outskirts of Christchurch on January 11-12.

But, immediately after the podium celebrations in Taupo, the champagne corks were promptly inserted back into the bottles and bike mechanic Damon Rees exited the Whakatane workshop and boarded a plane for Australia.

There he took his Honda CBR1000SP1 to record a pair of superb 10th-place finishes at the final round of the Australian Superbike Championships at Sydney Motorsport Park just over a week ago, that performance capping off a solid spell of racing for the young Honda star from Whakatane.

Damon Rees, making his superbike debut in Australia this season, contested all seven rounds of the Australian championships, immediately establishing himself among the leading riders in the glamour class as he ended the series 11th overall.

The 24-year-old’s achievements were further recognised with his earning the “Rookie of the Year” award in Australia this season.

“It has been a brilliant warm-up really,” Rees acknowledged. “Although, to be fair, I never really let the cobwebs settle from the end of the 2019 New Zealand Superbike Champs (where he debuted on the Honda CRB1000SP1 bike, won the final race of the series and settled for fourth overall for the campaign).

“The endurance race win at Taupo was brilliant because Mitch was making his comeback from injury and short of his best. He injured his leg and had undergone an extra operation on it just three months earlier.

“Racing in Australia was a great challenge for me. It was my first time on a superbike in Australia this year and so I was pretty pleased with how I went there too.

“I’m feeling quite confident right now and really looking forward to racing the Suzuki International Series (through December) and then the five-round 2020 superbike nationals (from January to April).

“With all the race time I’ve had on the bike, it means we have worked out some good base settings for suspension and so on, possibly giving me an advantage over most of my New Zealand rivals.

“I will definitely be ready to go at round one.”