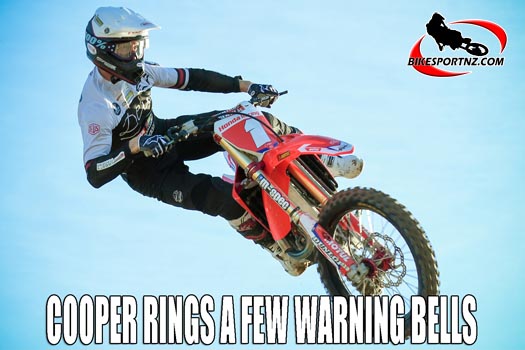 Signs are looking ominous for Cody Cooper’s rivals ahead of the coming summer season of motocross racing in New Zealand.

The Honda ace opened his 2019-20 season account at the big annual Huka Honda-sponsored MX Fest event in Taupo over the Labour Weekend by winning the Speedcross event on Saturday evening, delighting a large crowd with his high-flying prowess as he edged out Taupo’s Brad Groombridge, Mount Maunganui’s Josiah Natzke and Tauranga’s Roydon White in the final.

Cooper then backed that up by taking his Motul Honda CRF450 to dominate the MX1 class in the motocross the following day, finishing 1-1-3-2 in his four races.

He finished the day a solid 16 points clear of runner-up Groombridge at MX Fest on Sunday and Oropi’s Ben Townley was third overall, while Taihape’s Hayden Smith and Hamilton’s Kayne Lamont rounded out the top five in the MX1 class.

Cooper’s third placing in the third MX1 race on Sunday was something of an aberration – he crashed on lap one while battling for the lead and he was forced to claw his way back through the pack – and his runner-up finish in the final Huka Honda Shootout race (the last in a series of short sprint races where a number of riders were eliminated each time, whittled down from 40, to 20, to 10, to six and then the last three) was also out of character.

He crashed in turn one of the final three-rider, one-lap dash and he did not have enough time to catch up to eventual race winner Lamont.

And even if Cooper’s results did not say it loud enough for his rivals to take note, his lap times certainly spoke volumes and proved he will be the man to beat again this summer, with the annual Honda Summercross at Whakatane coming up just after Christmas, then the annual Honda New Zealand Motocross Grand Prix at Woodville in the New Year, followed by the four-round New Zealand Motocross Championships, starting in Balclutha in February.

“I got awesome starts all weekend at MX Fest,” said the 36-year-old Cooper matter-of-factly.

“I was trying some new suspension settings and I think we got them wrong, which explains the crash in race three. I was struggling a bit with the settings, but it was good to try things out at this race meeting. That’s what it’s all about this early in the season.

“In the shoot-out final I got on the gas early in the first turn and the rear tyre wasn’t in a groove and it just slid out on me. It was entirely my own fault. With the race being a one-lap affair, I was never going to be able to catch up.”

Lamont won this final shootout race unchallenged and with that he secured the Nicky Smith Memorial trophy, the third consecutive year that the Yamaha man has done this.

Unfortunately for Lamont, water seeping into electrical components forced a DNS for him in MX1 race two, the race starting without him while he was frustratingly still trying to have the problem repaired by his crew as he sat on the start line.

Lamont rectified things slightly with a solid runner-up finish in the next MX1 race, but it was never going to be enough to see him challenge for the class win outright and he ended the weekend fifth outright in the class.

“I felt good with my racing and was always in control. There are a couple of areas that I need to work on, but otherwise it’s all good,” Cooper said.

Cooper has a busy time ahead now. He will cross Cook Strait and head to Winton, near Invercargill, for round one of the New Zealand Supercross Championships in just over a week’s time (November 9), before travelling back north to tackle the S-X Open Auckland at Mt Smart Stadium a week later (on November 16).

The final round of the New Zealand Supercross Championships at Tokoroa on November 23 will see him wrap up the stadium racing phase of his season and he switches back to motocross mode for the big races at Whakatane and Woodville.

Cooper is the defending national motocross champion in the premier MX1 class and will be aiming to clinch his eighth national MX1 crown when the 2020 series wraps up on March 15, at the same track that hosted the weekend’s MX Fest extravaganza.