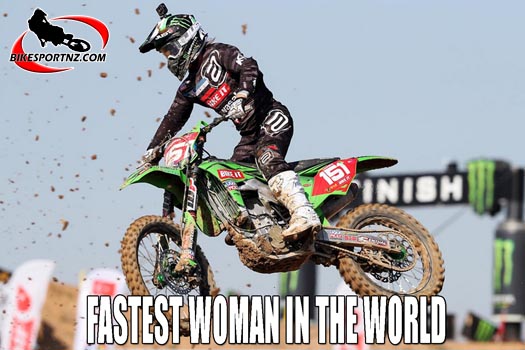 Nine wins from 10 starts … winning a world championship title doesn’t get much more impressive than that.

So comprehensive was New Zealander Courtney Duncan’s Women’s Motocross World Championships (WMX) campaign this season that she wrapped up the five-round series with a race to spare, completing a 1-1 sweep of the final round in Turkey overnight.

It was a year of redemption and resurrection for the 23-year-old Duncan, the Otago rider celebrating her Kawasaki debut this season by finally  achieving her lifelong dream.

Destined never to race a GP on home soil and, in fact, she was always going to have to travel the farthest to compete on this world stage, Duncan had to endure three frustrating seasons of “so close, but yet so far” before he breakthrough success this year.

Duncan joined the British-based DRT Kawasaki this season and tasted immediate success, finishing 14th and first at the opening WMX GP at Valkenswaard, in The Netherlands, in April – fourth overall for the GP – in what would actually turn out to be her worst score of the season.

She won every race after that.

Duncan headed to Turkey for September’s final round with a whopping 23-point advantage over her nearest rival, German rider Larissa Papenmeier (Yamaha).

She qualified fastest and knew that a win in the first race in Turkey would give her the world title with a race to spare.

On lap six she took over the lead, racing clear to secure the win by 12 seconds over Danish rider Sara Anderson (KTM), Duncan’s eighth victory in nine races, extending her world championship lead to 31 points.

With a maximum of only 25 points available in the final race of the season the following day, she was met by a jubilant Bike It DRT Kawasaki crew at the finish line and handed a golden helmet to be crowned Women’s World Motocross Champion for 2019.

“I’m just lost for words; it’s indescribable!” she said on the finish line.

“I’ve expected big things of myself ever since I joined Kawasaki at the start of the year but I just had to take my time, learn from my mistakes and not quit. I’ve gone through hell in the past years to get here; I’ve had so many tough times and injuries.

“Big thanks to my family, my sponsors and everyone at Bike It DRT and Kawasaki for their support. This is the biggest day of my life; just love you all!”

Though she didn’t need to, she capped off her weekend and the year with another convincing win the following day, this time crossing the line a massive 29 seconds ahead of Anderson.

“I got asked did I feel pressure going into the race and I’ve got to be completely honest with you, lining up I felt so comfortable and confident. After the sight lap, I knew the track had changed a lot. I had it in my mind that I was going to warm up into the race, so I took a few laps, found some good lines and made the passes. Then I just kind of cruised and maintained the lead. It was good enough to win the championship in the first moto. It feels amazing,” Duncan said.

“I don’t know how to describe it – the journey to get here has been tough. Man, it’s been tough! After winning my first pro race on debut (in 2016), I felt like I couldn’t do nothing wrong. Since then it’s been a downward slope but this year, we changed that and we turned it around and made it happen,” she said.

“So much gets built into this. This goes way back to when I started when I was seven years of age. Everything goes into this. So much effort from my family – they did so much for me growing up to get me to this point. All my team, my sponsors everyone back over home. I have a huge team at home, and everyone plays a huge part in this championship. It was definitely a team effort. I can’t thank everyone enough,” Duncan said.

“It’s going to take a bit of time to fully settle in, what we have just achieved. I know I’m going to look back and realise that this was pretty special.

“I had nothing to lose (in the final race of the series), so I just put down the hammer. I had a good flow, could have fun, throw some whips and embrace the moment.

“What a way to end the series! Nine motos out of 10 and four GPs out of five! The whole year has been so amazing. I was in a dark spot last year, in a rut mentally and physically, but Steve (Dixon) took a chance on me and I really gelled with the team and the bike from day one. We committed and we succeeded!

“I’m having as much fun this year as I did when I started riding way back at seven years of age; that’s so important and it’s what brings results.”

But, for those three consecutive seasons, the intrepid Kiwi has had luck abandon her in her hour of need.

Twice she was denied the world title through injury and on the other occasion she was victim of a controversial decision by officials.

Leading the series in 2016, she struck an errant photographer who was standing out on the track at the German  GP, crashed and broke her wrist.

In 2017 she was again on target to win the title when a muddy hillside at the final round in France became impossible for the riders and the race was abandoned.

Instead of the race being wound back a lap prior to the stoppage (when Duncan had been leading) and a result declared from that, as normally happens, it was controversially decided to give the title to the French rider who was leading at the moment the race was finally halted, despite so many of the riders by that stage having illegally cut the course to avoid the hill.

Again leading the world series in 2018, she suffered further misfortune, this time injuring her right foot during a non-WMX race between the GPs, ruling her out of the final two GP events.

So, more determined than ever to finally achieve her goal, Duncan this year made the decision to join the Kawasaki outfit, run by Briton Steve Dixon.

“They gave me an awesome opportunity and I was very motivated to put them on top in 2019. A fresh start was what I needed.”

Duncan has already signed again with the Bike It DRT Kawasaki Racing Team and she will defend her No.1 plate for them in 2020.