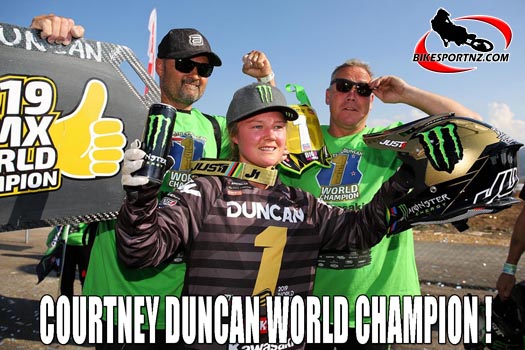 New Zealand’s Courtney Duncan is on top of the world, winning her maiden world championship title at the fifth and final round in Turkey overnight.

It was a lifetime ambition achieved when she became FIM WMX Women’s World Motocross Champion with Bike It DRT Kawasaki in Turkey with her eighth victory out of nine races this season.

The 23-year-old from Dunedin has dominated the series since joining Kawasaki at the start of the year and was again in outstanding form as she topped timed qualifying practice by more than three seconds at the track built on the outskirts of Afyonkarahisar in central Anatolia.

Leading the series by 23 points at the start of the weekend in Turkey, the Kiwi went to the start in the secure knowledge that victory in the first moto of this, the final round of the series, would ensure the title with a race to spare.

Knowing that her race speed was significantly faster than the opposition Courtney sensibly didn’t take any risks of a collision through the always hectic first turn and opening lap but she had already taken over third place ahead of her title rival on the opening lap and two laps later she swept into second place. 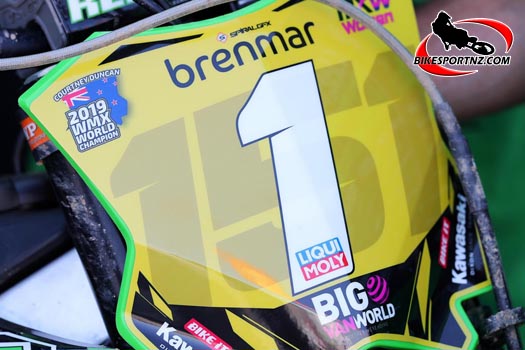 New Zealand’s Courtney Duncan is on top of the world, winning her maiden world championship title in Turkey overnight.

On lap six she took over the lead, racing clear to secure her eighth victory in the nine races run so far this year by 12 seconds. Having extended her series lead to 31 points with a maximum of 25 points available in the final race of the season tomorrow, she was met by a jubilant Bike It DRT Kawasaki crew at the finish line with a golden helmet to be crowned Women’s World Motocross Champion.

Courtney Duncan: “I’m just lost for words; it’s indescribable! I’ve expected big things of myself ever since I joined Kawasaki at the start of the year but I just had to take my time, learn from my mistakes and not quit. I’ve gone through hell in the past years to get here; I’ve had so many tough times and injuries.

“The track had changed a lot since our qualifying this morning so I didn’t take any chances through the opening laps; I knew what I had to do to clinch the title and it didn’t matter if I won by 30 seconds or (just) two as long as we got the job done. My big thanks to my family, my sponsors and everyone at Bike It DRT and Kawasaki for their support. This is the biggest day of my life; just love you all!

“Moto one was really good. I got asked did I feel pressure going into the race and I’ve got to be completely honest with you, lining up I felt so comfortable and confident. After the sight lap, I knew the track had changed a lot. I had it in my mind that I was going to warm up into the race, so I took a few laps, found some good lines and made the passes. Then I just kind of cruised and maintained the lead. It was good enough to win the championship in the first moto. It feels amazing,” Duncan said.

“I don’t know how to describe it – the journey to get here has been tough. Man, it’s been tough! After winning my first pro race on debut [in 2016] I felt like I couldn’t do nothing wrong. Since then it’s been a downward slope but this year, we changed that and we turned it around and made it happen,” she said.

“I don’t know how to describe it – the journey to get here has been tough. Man, it’s been tough! After winning my first pro race on debut [in 2016] I felt like I couldn’t do nothing wrong. Since then it’s been a downward slope but this year, we changed that and we turned it around and made it happen,” she said.

“So much gets built into this. This goes way back to when I started when I was seven years of age. Everything goes into this. So much effort from my family – they did so much for me growing up to get me to this point. All my team, my sponsors everyone back over home. I have a huge team at home, and everyone plays a huge part in this championship. It was definitely a team effort. I can’t thank everyone enough,” Duncan said.

“It’s going to take a bit of time to fully settle in, what we have just achieved. I know I’m going to look back and realise that this was pretty special.”

The latest victory also extended Kawasaki’s lead in the manufacturers’ classification to 15 points and a top 11 finish in tomorrow morning’s final moto will also secure this honour.