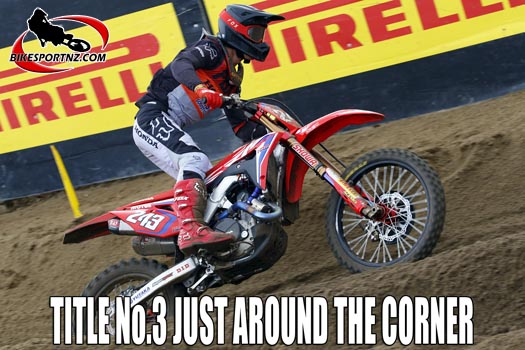 With just four rounds remaining and a massive 187-point lead, it looks as if Slovenian Tim Gajser merely needs to stay upright to win the MXGP crown for 2019.

The Honda rider had his work cut out battling against nine-time former world champion Antonio Cairoli (KTM) in the early part of this season, but when the Italian dropped out with injury, the pressure was off for Gajser … or was it?

Frenchman Romain Febvre (Yamaha) and Swiss Yamaha riders Arnaud Tonus and Jeremy Seewer, in particular, have kept Gajser honest, but it would perhaps be a foolish man to bet against Gajser adding another MXGP title to the MX2 crown he won in 2015 and the MXGP crown he won in 2016.

It’s fair to say Gajser has three GPs up his sleeve.

The MXGP of Belgium is one of the most awaited of the MXGP calendar, being in the heart of Europe, home track for many of the MXGP and MX2 riders and welcoming thousands of motocross fans who all enjoy the world famous sand circuit.

Gajser finished 2-2 at the weekend and it was more than enough to win the MXGP of Belgium in the MXGP class, and extend his championship lead over Monster Energy Yamaha Factory MXGP rider Seewer to 187 points with just four rounds to go. Monster Energy Yamaha Factory MXGP team’s Febvre was second overall with 1-4 results and third overall was Standing Construct KTM’s Glenn Coldenhoff with 3-3 results.

In the opening MXGP race it was Coldenhoff who took the holeshot from Febvre and Gajser. Rockstar Energy Husqvarna Factory Racing’s Arminas Jasikonis was down in last after a crash in the first corner as well as Standing Construct KTM’s pole sitter Max Anstie who crashed in the first corner and struggled to get going again. Gajser moved into the lead while Team Honda SR’s Jeremy Van Horebeek moved into the top 10.

After a lap the lead was a little more than a couple of bike lengths as Gajser continued to shine in the Belgian sand until Febvre moved into the lead on lap two.

Five laps in and Febvre had just two seconds over Gajser while Coldenhoff was closing up on Gajser. The top three remained close, but not close enough for any passing. Jasikonis moved into eight position and dropped Monster Energy Wilvo Yamaha’s Gautier Paulin to ninth position. After nine laps the lead of Febvre was two seconds with Coldenhoff in third a further two seconds behind, Seewer was fourth and Jonass fifth.

Tonus made a pass inside on Rockstar Energy Husqvarna Factory Racing’s Pauls Jonass for fifth while Van Horebeek closed up on those two. Febvre was starting to get away from Gajser on lap 10 with four seconds between himself and Gajser.

Gajser put in a quick lap time and close the lead to just two seconds and looked like he was going after Febvre, but then just as quickly Febvre put in a good lap and got the lead back to five seconds.

Febvre was pushing hard and the lead was seven seconds on lap 14 while Gajser had a four second lead over Coldenhoff. It was a kind of lonely race for the top three guys and their unbelievable ride.

In the second MXGP race, it was Gajser in the lead from Van Horebeek, Anstie, Coldenhoff, Koch, Tonus, Jonass, Strijbos, Monticelli and Tixier in 10th. Febvre started in 11th place. Anstie quickly moved into second place while Febvre was quickly into sixth position.

One lap in and Gajser was just ahead of Anstie, with Van Horebeek a further seven seconds back in third place. Jonass had trouble with the bike and had to drop in 14thwhile Febvre, Jasikonis and Seewer moved past. Anstie moved into the lead on lap four and after four laps it was Anstie, Gajser, Van Horebeek, Coldenhoff and Febvre to round out the top five.

Anstie was on fire up front as he pulled to more than four seconds ahead of Gajser, with Van Horebeek 17 seconds back, and Coldenhoff and Febvre right on him for third place. On lap eight, Jonass again stalled on the track and tried to get his bike running.

Anstie pushed hard in the mid stages as he made the gap between himself and Gajser more than nine seconds and Van Horebeek 20 seconds behind the leader. Jasikonis passed Febvre and the Frenchman’s chances of a GP victory slipped away. Febvre did fight back and re-passed Jasikonis and around the same time Anstie went down and Gajser moved into the lead.

Things got interesting with Anstie, Van Horebeek, Coldenhoff and Febvre all right behind the Slovenian rider. Van Horebeek tried to get past Anstie, and it all helped Gajser who was suddenly more than six seconds in the lead.

Van Horebeek fell down after handing Coldenhoff third place and the Belgian also let Febvre into fourth position, but up front Gajser was in complete control. Anstie pulled back the lead by Gajser and passed the HRC rider on lap 14. Gajser, though, was too strong over the two races and won the overall with 2-2 scores.

Anstie won his first race of the 2019 Season and the first ever in top class ahead of Gajser and Coldenhoff while Gajser won the GP with 2-2, for the Slovenian is the first Belgian GP win ever and it marked the first win for Honda in the premier class in Lommel. Febvre missed the GP win for 1 point shy as for Coldenhoff was the first podium appearance of the season.

Tim Gajser: “I had fun today and it is weird saying that in the sand for me. I had two good races and I let Max pass because he was faster, then he made a mistake and I got him back, then he passed me again. They told me if I was second, I would have won the overall. I very happy with this GP win as I didn’t expect it.

“I expected a top five would be good and to win here is really special. We have worked in the sand in the winter and it really worked out. The track was rough, and it was easy to make a mistake. I will try and make a good start and see if I can stay with these guys, but if I can’t, I will settle for the points. It is always mental, coming here to Lommel, we know the race will be tough, so deep and so bumpy and I did my best.”