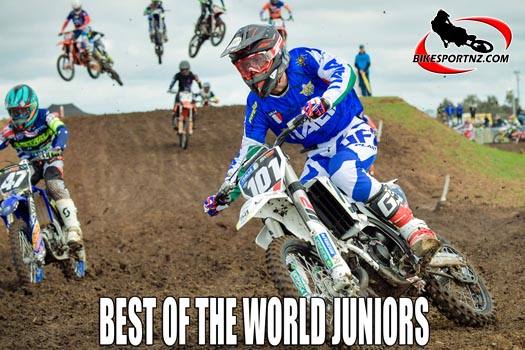 The prestigious 2019 Edition of the Junior Motocross World Championship is taking place this weekend at the stunning track of Pietramurata, Trentino, in Italy.

The Pietramurata track, which lies among the Dolomite mountains, will host the best junior motocross riders in the world.

On Friday evening riders and teams from 32 countries attended the opening ceremony which kicked off the event. The event was held at the podium area of Pietramurata.

The Opening ceremony began with some images from the 2018 Edition of the Junior Motocross World Championship held in Australia and was followed by a welcome speech from Youthstream Representative Patricia Maskarova, FIM CEO Tony Skillington and President of Motoclub Gianfranco Pasqua.

This edition is bound to be a one to remember, the host team, Team Italy is lining up with 21 riders, while winning Team Australia is participating with six riders among an outstanding starting list of 234 riders who go bar-to-bar on Monday morning (NZ time) with the hope to be crowned on Italian soil.

As for riders expectations, in the premier 125cc class several top riders are capable of becoming 2018 Junior World Champion. Team Italy is lining up with the 2018 runner-up in the 125cc Junior class, Mattia Guadagnini (pictured above), and Alessandro Facca among the others, Team Belgium will field Liam Everts, while Team France has on his side the EMX125 Presented by FMF Racing red plate holder Tom Guyon and EMX rider Florian Miot along with Netherlands’ Kay de Wolf and Swiss’ Mike Gwerder. Other well known names are South African Camden McLellan and Russian Nikita Kucherov.

The 85cc and 65cc classes are packed of young talents to watch out as possible winners such as: Netherlands’ Lotte Van Drunen and Czech Marek Vitězslav who won 65cc race one in 2018.