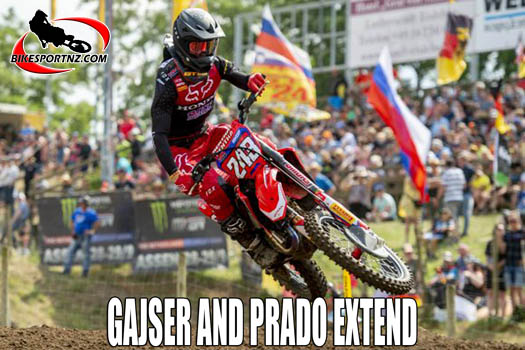 Round 12 of the FIM Motocross World Championship wrapped up at Semarang, in Indonesia, at the weekend with the championship leaders each extending their leads.

Gajser performances this season have been nothing less than amazing, perhaps none more so than at this Grand Prix of Indonesia.

After a lap the lead by the HRC rider was more than a second and riders were swapping positions throughout the field. Team Honda SR Motoblouz’s Jeremy Van Horebeek moved into seventh, then back to 11th, and Monster Energy Wilvo Yamaha Official MXGP’s Gautier Paulin dropped from seventh to 10th.

After four laps it was Gajser with a two second lead, then Jonass, Seewer, Jasikonis and Monster Energy Wilvo Yamaha Official MXGP’s Arnaud Tonus fifth. Febvre went down hard while battling with his team-mate Seewer and was forced to go out of the race after bending his front end. Jonass closed up on Gajser, but then Gajser fastened his pace and was two seconds up after six laps.

Gajser continued to control the race up front and on lap nine he was still around two seconds ahead of Jonass, with Seewer third, Jasikonis fourth and Tonus fifth while Standing Construct KTM’s Max Anstie had moved past his team-mate Ivo Monticelli for eight position.

Jonass went down hard and dropped out of the top 10 with an eventual race one disqualification result as he re-joined the race after leaving the track for ‘outside assistance’ while Tonus managed to pass Jasikonis for third.

After 13 laps the lead by Gajser was more than six seconds over Seewer, with Tonus third, Jasikonis fourth and Standing Construct KTM’s Glenn Coldenhoff fifth. Seewer crashed up the hill on lap 14 and handed Tonus the second place. Seewer found himself in third place while Coldenhoff closed in on Jasikonis until he succeeded to overtake. Gajser would win the opening MXGP race from Tonus and Seewer.

In the second MXGP race, it was Seewer who took the FOX Holeshot out front early ahead of Gajser, Jasikonis, Jonass and Tonus. Gajser was pushing hard to get into the lead and did just that after half a lap of the race.

On lap two Jasikonis nearly crashed, but saved it, and Febvre also got sideways, but didn’t lose a position. Coldenhoff went past Jasikonis, and after three laps it was Gajser with more than two seconds over Seewer, then Tonus, Jonass, and Paulin inside the top five.

Van Horebeek crashed and dropped back to 12th position, and after four laps it was Gajser ahead of Seewer, Tonus, Jonass and Paulin. Six laps in and Gajser still held the lead over Seewer and Tonus. Tonus made a mistake and Jonass moved into third place.

Tonus wasn’t about to hand third place to Jonass and fought back and was right on the back wheel of the Husqvarna rider. Jonass moved forward Seewer and so did Tonus though. A great battle between Jonass and Tonus for second place featured the last laps of race two. At the end of race two it was Gajser who won his 15th race of the season followed by Jonass and Tonus.

Gajser has won the MXGP of Asia with another perfect performance and 1-1 results. With his seventh Grand Prix win in a row the red plate owner has become the most successful Honda rider of all time for GP wins in a row. He also extended his points lead to 173 points over Seewer, who is now second in the points.

Second overall was Tonus and third was Seewer.

“Unbelievable, I was enjoying that second race so much and that is the most important thing,” said Gajser. “I took the holeshot and I controlled the second race. I had a big crash yesterday and I got a lot of help with that from people around me. After the crash yesterday in time practice I was struggling a little bit, I had a good start in the first race, made a gap and I was enjoying it out there. I am very happy to go home safe, that is the most important thing.”