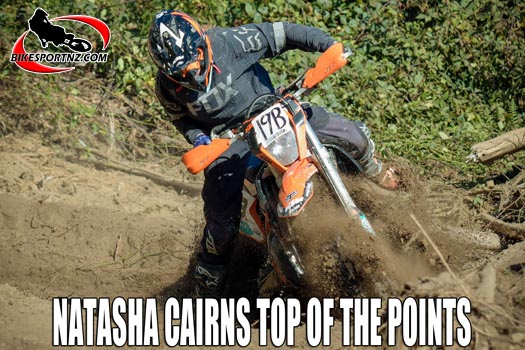 She may be down a little on horsepower and a female and up against some of the fastest and strongest young men in the country, but Thames dirt bike rider Natasha Cairns is out in front.

The 34-year-old took her KTM 150XC-W into battle against men, many of whom were on 250cc, 300cc and 350cc bikes, and she finished fourth overall at the fifth round of seven in this year’s New Zealand Enduro Championships, near Masterton on Saturday.

This was good enough to see her leapfrog into the series lead in the A grade (formerly known as the intermediate grade) and she now enjoys a seven-point advantage over her nearest title rival, Masterton KTM 300EXC rider Philip Bly, with just two rounds remaining.

Two other riders share third position overall after five rounds, Tokoroa’s Nick Wightman (KTM 150XC-W) and Omihi’s Ethan McBreen (Husqvarna TE150), and they are both another three points further back in the Mitas Tyres and Yamaha-sponsored series.

“I have finished no worse than fourth all season and so you can see that consistency is the key,” Cairns said.

“I sometimes struggle to finish the day, particularly when it’s muddy, but I just keep in there and tough it out.

“I don’t think a lack of horsepower is actually a disadvantage for me. It’s all about the person on the end of the throttle. If you can get over the fear and twist it on hard, you’ll probably do okay,” said Cairns, one of the women who was instrumental in organising the inaugural Rise of the Queens women’s ride weekend in May, that event jointly sponsored by KTM and Motorex.

“It was an outstanding event, with 150 girls joining in. We did trail riding, had a few training sessions and some equipment clinics too … it had a bit of everything.

“We are already in the processes of planning next year’s Rise of the Queens event.”

Meanwhile, Rotorua Husqvarna rider Bradley Lauder claimed the top spot in AA grade (formerly known as the expert grade) at Masterson on Saturday, becoming the fifth different winner in as many races this season.

Helensville’s Tom Buxton (KTM 350EXC-F) won round one of the series near Whangamata in March, Cambridge rider Dylan Yearbury (Husqvarna FE250) clinched the win at round two near Porirua in April, Thames rider Chris Birch (KTM 300EXC) topped the podium at round three near Tokoroa two weeks later and Whanganui’s Seth Reardon (Yamaha YZ250FX) won round four near Martinborough three weeks ago.

The double-header final weekend of the enduro nationals, rounds six and seven of the series, are set for Hokitika in three weeks’ time, on July 19 and 20.