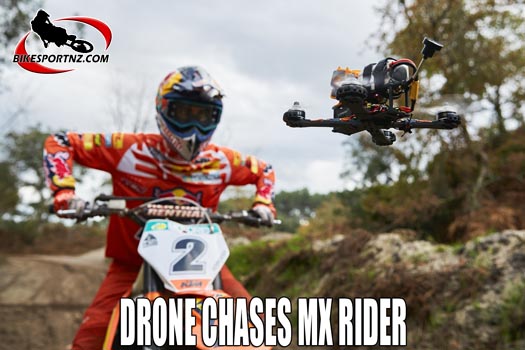 Have a look at this as French motocross rider Camille Chapelière is filmed up close and personal by custom built racing drone.

Ride on board with Chapelière as his every move is caught on camera by a drone.

The drone was piloted by Tom ‘Tomz’ Panaivia, shadowing Chapelière’s every move at a secret filming location in southern Europe. Here is all you need to know:

– The pair teamed up to give an insight to what it’s like to ride on board with Chapelière giving views from the back of the bike as sand is kicked up and a close-up from the front as the bike arcs its way through the route at pace.

– As the drone ducks through gaps in the trees, it gives the impression that bike and drone are just a few centimetres away and, in so doing, a fraction away from colliding on the course.