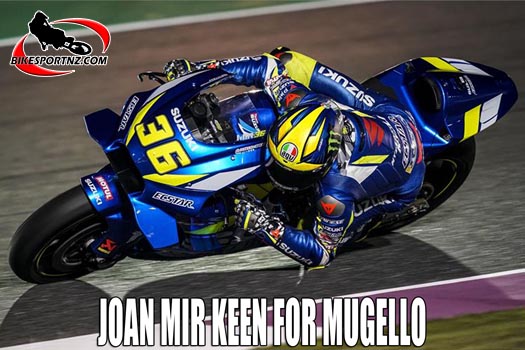 The 2017 Moto3 world champion and now MotoGP rookie Joan Mir has said he is eager to embrace racing at the Mugello circuit on a MotoGP bike this weekend.

Currently 18th in the MotoGP world rankings, Mir said he “can’t wait” to experience the exciting Mugello circuit, which includes the fastest straight of the season.

His Ecstar Suzuki team-mate Alex Rins is currently third in the standings.

This weekend’s sixth round of the world championships at Mugello, in Italy, will be Mir’s chance to show his potential.

The official MotoGP top speed record is 356.5km/h (221.5mph), set by Ducati’s Andrea Dovizioso during last year’s Italian race and, while Mir’s Suzuki is currently lagging behind Ducati and Honda for straight-line performance, he could still break the 350 km/h mark.

“I like the layout of Mugello very much, it is exciting and gives you a lot of adrenaline, I can’t wait to experience it with the full power of a MotoGP machine,” Mir said.

“Mugello is probably the fastest track on the calendar, which means you need good top speed, good aerodynamics, and a good gearbox,” said his crew chief Frankie Carchedi.

“In fact, the gearbox is one of the hardest things to set-up, because a lot of the corners are only second or third gear, but you need a lot of acceleration for the long start/finish straight.

“There are fast chicanes and corners which flow into each other, that plays to our strengths.

“So, although some other manufacturers might have more top speed, it’s important to be strong all the way around the lap – and our strengths lie in other areas.”

But Mir’s first goal will just be to score points, having failed to do so after an eighth place on his debut in Qatar.

“I’ve had time to recover from the disappointment of Le Mans and I’m ready to get rid of all the bad luck we’ve had so far,” said the Spaniard, who joined Karel Abraham in falling on the warm-up lap in France.

“I feel confident with my team and the GSX-RR, Mugello will be tough for us but our working method is solid and allows us to be optimistic.

“The fans will be surrounding us, giving us a further push.”