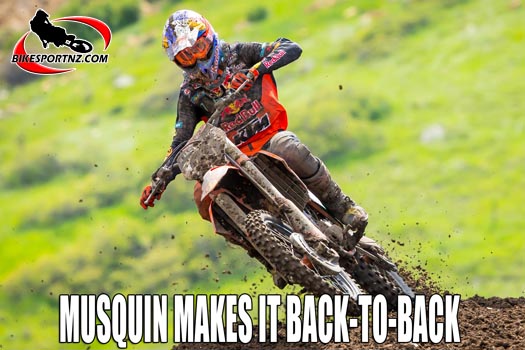 The United States Motocross Championships reached the halfway point of the 2019 season on Saturday with its annual visit to Southwick, Massachusetts.

Red Bull KTM Factory Racing’s Marvin Musquin took his second straight 450 class victory at “The Wick 338” on Saturday, while Monster Energy/Pro Circuit/Kawasaki’s Adam Cianciarulo added to his dominant start to the season with his fifth 250cc class victory in the six rounds so far.

Musquin picked up where he left off to start the opening 450 class moto by grabbing the holeshot over Monster Energy Kawasaki’s Eli Tomac. The Frenchman dropped the hammer on the opening lap to establish a lead over the field, while Tomac, the reigning series champion, began to drop positions, first to Team Honda HRC’s Ken Roczen and then to Rockstar Energy Husqvarna Factory Racing’s Zach Osborne. This shuffled Tomac off the podium and into the clutches of Red Bull KTM Factory Racing’s Cooper Webb.

Musquin was able to distance himself from everyone else and soon enjoyed a multi-second lead. As the moto wore on, Roczen started to lose pace and lost his hold of second to Osborne. Tomac was able to regroup from his sluggish start and march his way back to the front. He got around Roczen to get back into podium contention in third, and continued to push his way up to Osborne. The rookie held the champ at bay for a few laps, but Tomac made an impressive pass to return to third. However, by this point Musquin was simply too far out front.

Musquin was flawless en route to his second moto win of the season, with a wire-to-wire effort that saw him take the chequered flag 9.1 seconds ahead of Tomac.

Osborne followed solidly in third, with Webb fourth and JGRMX/Yoshimura/Suzuki Factory Racing’s Fredrik Noren earning a season-best moto result in fifth. Roczen, who led the points multiple times this season and has two overall wins to his credit, continued to lose ground, eventually dropping outside the top 10 for a season-worst 12th-place finish.

The final moto of the afternoon saw Webb capture the holeshot, with Osborne and Musquin in tow. Tomac found himself just outside the top 10. Webb had a solid hold on the top spot, but a bobble on the opening lap opened the door for Osborne to storm into the lead, dropping Webb into second just ahead of his hard-charging teammate. Musquin gave chase, but just after the completion of the opening lap Roczen, who was looking to rebound from his tough first moto, passed him for third. Roczen didn’t stop there. He kept his charge going and after a persistent chase of Webb, he successfully made the pass for second. Not long after that, Musquin took advantage of an opportunity to pass Webb for third.

The intense battle between Roczen, Musquin and Webb allowed Osborne to open a gap of more than three seconds. Roczen briefly settled into second, but Musquin was able to attack and take away the position. As all this action unfolded, Tomac quietly moved his way up into the top five and had the lead group in his sights. Roczen started to lose pace again a little more than 10 minutes into the moto, and quickly fell from third to fifth as both Webb and Tomac got around. The German continued to drop back deep into the top 10.

Tomac proceeded to stalk Webb for third as they approached the halfway point of the moto. The KTM rider was able to hold off the champ for several laps, but Tomac eventually made the pass and move into podium position. At this point, Tomac went to work to try and chip away at his deficit to the lead duo. He sat about three seconds behind Musquin for second, and after several laps he closed to within a few bike lengths of his long-time rival. Musquin responded by picking up his pace, which allowed him to stop the threat.

Out front, Osborne managed the moto with the poise of the veteran racer he is, despite being a rookie in the 450 Class. The 29-year-old rider took his first moto win in the premier division by 11.1 seconds over Musquin, who capped off his winning afternoon with a second. Tomac soldiered home in third.

Musquin’s 1-2 effort asserted himself as the hottest rider in the championship, where he became the first rider to claim back-to-back victories this season. He also successfully defended his Southwick win from a year ago.

“Winning Southwick means a lot. Last year I kind of got lucky because Eli [Tomac] crashed out, but this weekend Zach [Osborne] and I were on it,” said Musquin. “Eli was coming on strong at the end, but I responded and eventually he gave up, thankfully. It was a rough start to the season, and it’s hard mentally when you’re not on the podium, but I’ve still got it.”

For the first time in 2019 a rider will sit atop the 450 Class standings for consecutive weekends, with Tomac maintaining his hold on the championship lead. He’s moved out to a 26-point lead over Musquin, who climbed into second with the win. Roczen, who finished a season-worst ninth (12-10), drops to third, 28 points out of the lead.