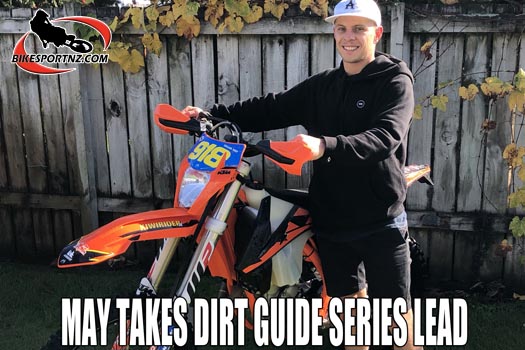 Armed with a brand new KTM bike, Auckland’s Callan May was determined he would lead from the beginning of this year’s edition of the three-round Dirt Guide Cross-country Series.

That’s exactly what the 27-year-old did on Saturday when a shotgun blast signalled the start to the two-hour senior race, in forestry at Ohakuri, about halfway between Tokoroa and Taupo.

May took his new 2019-model KTM 350EXC-F to exit turn one with a bunch of three or four other fast starters for company, but the Titirangi man was on his own and out front just five minutes after that and he “never looked back from there”.

“The conditions were difficult (after heavy rain had drenched the forest), but it was not impossible,” said May.

“I have only raced about four times since last December and all of those rides happening in just the last few weeks. Also, I’m on a new bike now, so I didn’t really know what to expect.

“But I’m loving the new KTM 350EXC-F. It’s a stock standard bike and giving me a fresh outlook on my racing. It is very easy to ride and go fast on it.

“I had built up such a good lead (over the pursuing riders) that, when I entered the timing zone with just a couple of minutes left before the two hours had elapsed, I decided to just sit there and wait for the clock to tick over the two hours. I couldn’t see anybody in sight behind me.”

“My fitness was pretty good, despite me having not raced much lately,” said May afterwards.

“I have been mountain-biking a lot though,” he confessed.

The popular three-round Dirt Guide Series has wide appeal, attracting a diverse range of talents, but it also entices the cream of New Zealand’s dirt biking community to turn up in large numbers.

This is something that should surprise nobody because it is precisely events such as this that have created, inspired and nurtured Kiwi cross-country racing talent over the years before setting some of our brightest young talent on pathways to top-level international competition.

First equal in the Dirt Guide Series in 2013, May is one of several Dirt Guide champions from the past who have progressed to race overseas, each of them able to trace their careers back to popular Kiwi dirt bike competitions such as this one.

Other former Dirt Guide race winners who have gone on to greater things overseas include individuals such as Whibley, Coatesville’s Sam Greenslade and Howick’s Liam Draper.

Draper is currently racing for a KTM team in the United States and waving the Kiwi flag high at the Grand National Cross-country Championships (GNCC) there.

Round two of the series is set for the same course at Ohakuri, in just three weeks time, on June 22, and the third and final round of the series on August 24, also at the popular Ohakuri venue.