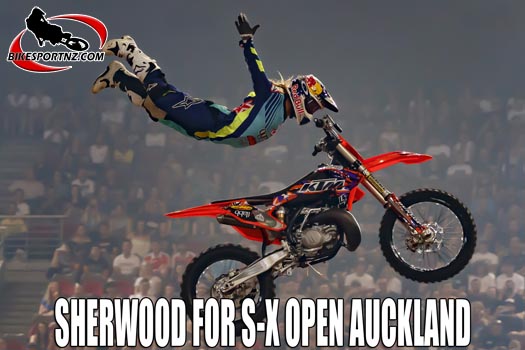 Sherwood, a two-times X Games and Nitro World Games Gold Medallist, is expected to be a huge draw-card as he looks to become the inaugural winner of the FMX Best-Trick contest.

“I’m pumped to be heading to Mt Smart Stadium on November 16 to compete in what will be the biggest FMX contest on New Zealand soil,” Sherwood said.

“Freestyle motocross has come a long way since guys started back flipping dirt bikes and I’ve got something big up my sleeve that I know will lift everyone off their seats in Auckland.

“With Bilko [Blake Williams] and Harry Bink already confirmed for the contest, I’m going to need all the support from the crowd to win it for the Kiwis.”

Top riders will also perform in the Freestyle Motocross (FMX).

Sherwood has earned the nickname ‘rubber kid’ from his main competitors, a reflection of his ability to execute tricks with extension and finesse.

This advantage remains Sherwood’s main weapon in his arsenal of tricks, with each trick executed to the utmost degree of perfection.