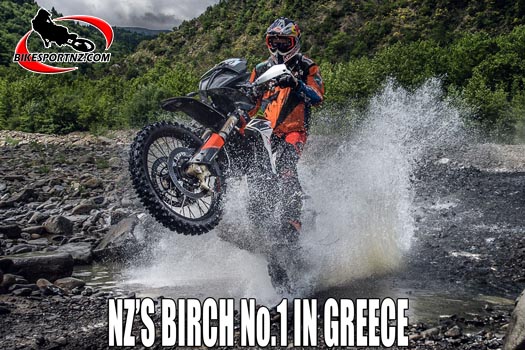 The 2019 edition of the Hellas Rally Raid saw a little less than 200 competitors take on a 1,200km adventure in the mountains of central Greece. Opting to enter the week-long event on the potent twin-cylinder KTM 790 Adventure R, Birch went head-to-head against a number of racers on all kinds of enduro machines.

Putting in a consistent run in the opening stages of the race, the KTM ambassador and racer Birch made full use of his vast experience to climb up in the overall rankings as the race went on. Crossing the finish line on Sunday with a total race time of 27 hours and 39 minutes, Chris was 30 minutes behind overall winner Leonardo Tonelli.

“It’s been a great week of racing here in Greece and I’m very happy with fourth overall and with the win in the Adventure bike class,” said multi-time New Zealand enduro champion Birch.

“Ever since I rode the prototype KTM 790 Adventure R, my eyes were set on racing this cool new machine. I’m happy I crossed the finish line of this rally on this bike. A huge highlight for me was learning how to get the most of this cool machine.

“It’s an amazing motorcycle and it’s taken me a while to learn how to explore its vast potential. The places we went in this race were incredible. From remote mountain passes with stunning scenery to enduro-styled trails in the valleys. The low point for me was losing my navigation gear for almost 250km and being forced to ride in the dust of other riders.

“Luckily the mechanics from the Kini Red Bull squad did a great job and fixed the issue at the next service point. Overall, it’s been an amazing experience racing the big bike in Greece and I enjoyed every moment of it.”