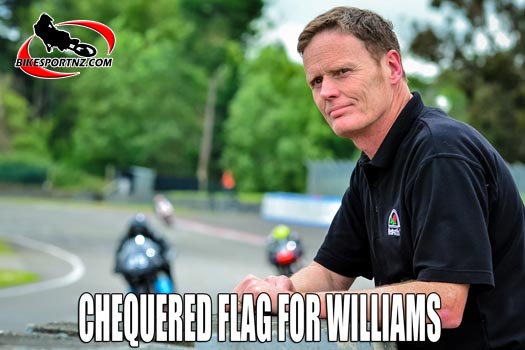 As a motorcycle racer, Glen Williams has seen plenty of chequered flags over the years … and here’s another one for him.

The current President of Motorcycling New Zealand is ending his involvement with the 101-year-old sporting organisation and will not be seeking re-election in May as MNZ’s President for the upcoming term.

In 2013, Williams retired from a long career competing in the sport with four national New Zealand championships to his name.

He then decided to stand for election onto the MNZ Board as he felt that his sporting and business experience might bring benefit to the organisation.

He became President of MNZ and President of FIM Oceania the regional body for Motorcycle sport a short time later.

Williams says he leaves the organisation in a stage of growth and financial strength, and that much of this is down to the quality of the people around him at MNZ.

“I feel that the time is right to be stepping down from the MNZ President’s role knowing that our governance and administration is in such good hands.

“During my time in the organisation, we saw the implementation of a fairly extensive review and restructure of our operational and governance systems. We also introduced the use of modern technologies to help bring a more efficient management culture and to help future-proof our sport.”

“Motorcycling and motorsport generally has been through some challenging times in the past decade. The fantastic work done by our many volunteers and the co-operation of our clubs who form the backbone of our organisation has helped me immensely through this time. It’s been a privilege to work with such enthusiastic people whom have the health of our sports future in the forefront of their minds.”

In the meantime, Glen will continue with his role as FIM Oceania President. That role sees him sitting on the board of the sports global body (FIM) as a director and as a member of the strategic and governance planning committees.