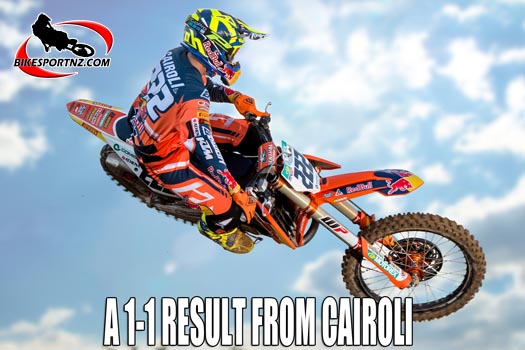 Round three of the 2019 MXGP world series was a memorable one for Red Bull KTM as Tony Cairoli and Jorge Prado completed a brilliant and dominant weekend at the Grand Prix of the Netherlands at Valkenswaard.

A week after the fast and spectacular Grand Prix of Great Britain at Matterley Basin, MXGP travelled to the shallow and bumpy sand of the Eurocircuit in Valkenswaard, a short distance south of Eindhoven.

Pleasant and bright conditions cast memories of the snow-stricken 2018 edition of the Grand Prix further into the distance and Red Bull KTM were happy to welcome MX2 World Champion Jorge Prado back into action after the eighteen year old had recovered sufficiently from his left shoulder problem. The Dutch sand was rough, quick and demanding but it was also a stage for the talents and determination of the KTM troupe.

Still nursing a slight shoulder and neck complaint, Tony Cairoli rode to his first Qualification Heat victory of the season on Saturday and across a Valkenswaard terrain that was dusty and relentless. Cairoli was watched by injured World Champion and team-mate Jeffrey Herlings.

The track roughened for Sunday and Cairoli grabbed two holeshots on his KTM 450 SX-F to assist his breakaway from the pack. The first moto was relatively comfortable for the nine-times world champion but he faced late pressure from Tim Gajser in the second before posting his second 1-1 of the campaign.

Cairoli has now won five from the six motos so far in 2019, as well as all three Grands Prix in Argentina, UK and Holland. He elevated his career tally to 88 triumphs and holds a championship lead of 22 points over Gajser.

“It was a very nice weekend,” said Cairoli.

“I didn’t really feel great all week. On hard-pack I was OK but this small shoulder problem in the sand made things difficult. Anyway, looking at the bigger picture we took two wins and you cannot get more than fifty points so it was a great weekend. Also no crashes, which was important on this track where we saw a lot of people going down. It will be a busy week now with my home GP but I hope to see a lot of public at Arco and KTM again on top of the podium.”

Jorge Prado initial aim for the weekend was to ‘attempt’ the Grand Prix where he finished as runner-up in 2018 after almost two weeks without being able to train.

The Spaniard’s weakened left shoulder felt up to the task of setting the pace on his KTM 250 SX-F and, like Cairoli, he benefitted from two holeshots on Sunday to streak ahead at the front of the MX2 field. Jorge maintained his 100% win ratio after dominating the season-opening Grand Prix of Argentina and pushed up to fourth in the championship standings (36 points behind Thomas Kjer Olsen) after missing the British fixture last week.

With both red plates Red Bull KTM will move with the MXGP circus to the third race in three weeks as the Grand Prix of Trentino will occur at the scenic Pietramurata circuit in Arco di Trento, Italy next weekend.