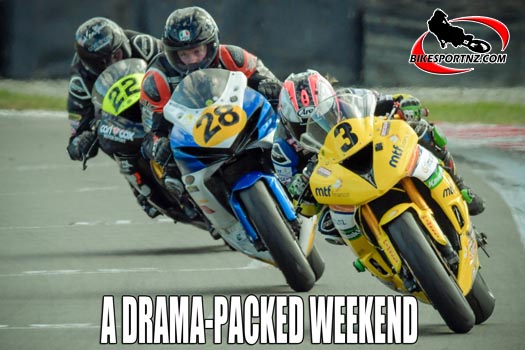 There were several key changes at the top after drama-filled racing at the fourth round of five in the 2019 New Zealand Superbike Championships at Circuit Chris Amon, Manfeild, on the outskirts of Feilding, at the weekend.

The premier 1000cc superbike class saw a new leader emerge, the third different individual to head the class since the series opener in Christchurch in January, with Glen Eden’s Daniel Mettam rewarded for his rich vein of recent form by taking over the series championship lead from Taupo’s Scott Moir.

Mettam won all three superbike races at Manfeild at the weekend and now leads Moir by five points.

The championship chase for the superbike class will go down to the wire at the final round at Taupo’s Bruce McLaren Motorsport Park next weekend.

There was a new leader too in the Supersport 600 class after the man who had dominated the earlier rounds – Manukau’s Toby Summers –  twice crashed at Manfeild, Rangiora’s Avalon Biddle the main beneficiary as her consistency enabled her to earn the series lead.

Biddle had started the weekend at Manfeild a whopping 22 points adrift of Summers, but his two non-finishes and her 1-1-2 score-card over the three Supersport 600 races propelled her past Summers.

She is now 29 points clear of Summers and a safe approach at Taupo next weekend should be enough for her to clinch her first national Supersport 600 title.

Te Awamutu’s Dave Hall also had reason to celebrate on Sunday as he finished the event a career-high second overall and enjoyed winning his first Supersport 600 race of the season. Hall is now third in the series standings, albeit still 36 points behind Summers.

It is worth noting, however, that results and standings for the Superbikes and Supersport 600 class, as well at the Pro Twins class, are only provisional at this stage.

Motorcycling New Zealand road-racing co-commissioner Grant Ramage said the final round of the series in Taupo this coming Saturday and Sunday should provide even more fantastic entertainment for bike fans.

“The championship action has been very close and looks set to continue next weekend too. It could not have been better scripted,” he said.

“If motorcycle fans want to be entertained, the New Zealand Superbike Championships have it all.”

The 2019 New Zealand Superbike Championships will wrap up at Taupo’s  Bruce McLaren Motorsport Park this coming weekend, on April 6-7.