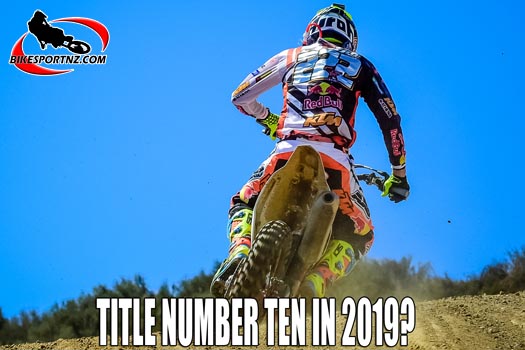 Italian Antonio Cairoli already has nine motocross world championship titles to his name and he’s well on the way to making it 10 this season.

If he can continue his momentum, he’ll win the MXGP title for 2019 and equal Belgian legend Stefan Everts as a record 10-time motocross world champion.

And KTM’s Cairoli is on home turf this weekend, so who would bet against him extending his points lead?

This weekend takes fans and competitors to Trentino, Italy for the fourth round of the 2019 FIM Motocross World Championship, the picturesque track set against the Dolomite Mountains of Italy.

This 2019 MXGP of Trentino will be the first of three Italian rounds of MXGP this season.

This weekend’s action also includes the EMX250 category and EMX125 class as well.

The EMX250 class last raced in Great Britain where Maddii Racing Husqvarna’s Alberto Forato had a dominant 1-1 showing. Last weekend Forato was a wild card entry into MX2 where he scored an impressive seventh overall. This weekend the Italian returns to the EMX250 class for the home round against 92 other entries in this class. 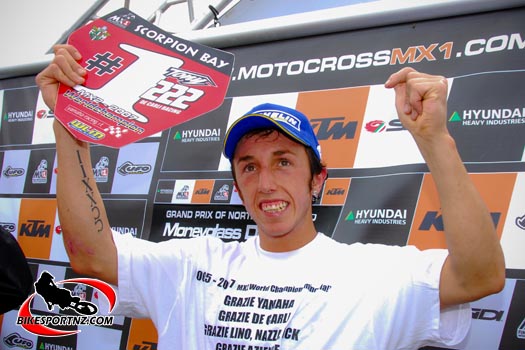 BikesportNZ.com was there when Antonio Cairoli won the MX2 world championships title in 2007. Photo by Andy McGechan, BikesportNZ.com

EMX125 will also hold its second round in Trentino after the first took place last weekend in Valkenswaard, in The Netherlands. The category’s current points leader hails from the same Maddii Racing Husqvarna team as Forato, Mattia Guadagnini. The Italian will fight against 100 ultra-competitive entries for the second week in a row.

Cairoli has won the Trentino GP three times out of his six attempts and aside his worst result of fifth he has never finished off the podium.

Though the Sicilian has seen much success here the home venue is not his favourite and with the packed schedule it will be interesting to see how he handles the weekend.

Team HRC’s Tim Gajser has been the fastest rider not to win this year and this is mostly due to his massive crashes at the past two rounds. Even so, Gajser has a perfect podium record so far and with the added fans expected to make the trip across the Slovenian-border Gajser is the other favourite for the win in Trentino this weekend. Gajser won the MX2 category there in 2015, reached the podium in 2016 and 2017 but finished seventh last year.

Standing Construct KTM’s Max Anstie is one to watch this weekend after leading laps in the Netherlands before a small but costly error set him back. The Brit had a top-five result in Trentino during his 2015 MX2 campaign but with potential rain forecasted his years of British mud riding could help propel him to the podium for the first time this season.

Also worth considering is Belgium’s Monster Energy Kawasaki Racing Team rider Clement Desalle who took second overall last weekend and at this same GP last year. Desalle surprised even himself with the result in the Netherlands after injuring his hand one week prior. Winning the Trentino GP in 2014 and taking the past two wins on the MXGP of Russia’s similar soil don’t be surprised to see the “MX panda” back on the podium.

Belgian compatriot Jeremy van Horebeek from Honda SR Motoblouz made hard charges through the field in the Netherlands to tie in points for 3rd overall but finish 4th. Van Horebeek’s best Trentino result also comes from 2014 when he finished 2nd behind Desalle.

Additional Italian fans’ favourites this week include Standing Construct KTM’s Ivo Monticelli and Gebben Van Venrooy Kawasaki’s Alessandro Lupino. Monticelli has looked like a new rider so far this year battling in the top ten and even proving to be a hard customer to pass in the battle for the top five last week.

The MX2 category is currently led by Rockstar Energy Husqvarna Factory Racing’s Thomas Kjer Olsen but the return of defending MX2 Champion Jorge Prado and his Red Bull KTM Factory Racing machine was a dominant one last Sunday in Holland.

Prado has strong memories from Trentino as well seeing as he won his first ever MX2 overall here in 2017 then took the win again last year. In addition, Prado now considers Italy his second home as he rides and lives with the Italian based De Carli squad. All of which combined make him the favourite for this weekend.

Aside from Olsen looking to take the win away from Prado F&H Racing Kawasaki’s Henry Jacobi will be looking for his first career win. The German has made massive strides in his riding as of late and has consistently been battling for the top 5 if not the podium so far this season. Jacobi’s career best finish prior to the 2ndoverall in Great Britain two weeks ago was his 3rd place here in 2018.

Team HRC’s Calvin Vlaanderen is 2nd in the points presently but has just missed the podium with 4th place finishes at each of the first three rounds this season. Vlaanderen’s drive to improve his results by at least one position could take him even further forward this weekend.

Monster Energy Kemea Yamaha Official MX2’s Ben Watson and Jago Geerts will be one to watch this week after Geerts reached the podium via a last lap pass on Olsen days ago. Watson currently is 5th in the points standings but one issue or another has held the British rider from reaching his full potential.