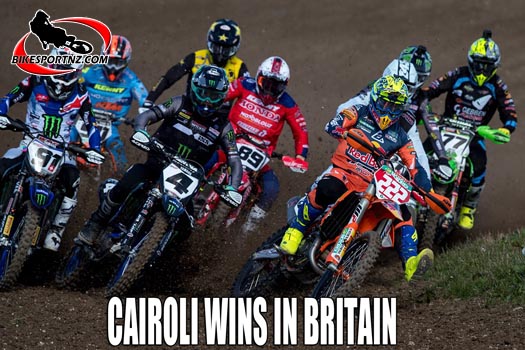 Italy’s Tony Cairoli clinched his second Grand Prix win of the season under sunny British skies at Matterley Basin, round two of the FIM World Championships at the weekend.

It was Cairoli’s 87th career win.

The first European round of 2019 MXGP landed in the UK after the long trip to Argentina to open the series.

The former Motocross of Nations venue at Matterley Basin provided a fast, challenging setting for the Grand Prix of Great Britain and for what was a busy and popular fixture on the calendar.

Red Bull KTM went to southern England at half strength with MX2 World Champion Jorge Prado (left shoulder) joining Dutchman Jeffrey Herlings on the sidelines but with the Spaniard hopeful of a swift return.

Cairoli missed out on his first qualification heat win on a cloudy and cold Saturday due to a mistake on the last lap of the race that cost the nine-times world champion the chequered flag.

Cairoli kept his head and, on race day Sunday, it was his rival and first moto leader Tim Gajser who fell and gifted a free run for Cairoli to the finish line.

The result marked the third consecutive moto win for Cairoli this season.

In the second race the Italian – who had been struggling with a stiff right shoulder and neck in the build-up to Matterley – rode to second place behind Gajser, shadowing the 2016 champion closely in the final laps and finishing only 1.7 seconds adrift. Cairoli’s second consecutive overall GP success this year gives him an eight-point lead in the early standings.

“It was a great weekend and for sure this track is one of my favourites.” said Cairoli.

“I had difficulty to push from the beginning because of a problem during the week and I was stiff. It meant I got arm-pump after three-four laps. I had to be careful because on this track if you are tight then you’ll crash because it is tricky and there are a lot of strange ruts and kickers. I was cautious and in the end it paid off. Hopefully I can be better for next week in the sand. For the championship everything is going well and that’s my goal.”

New Zealand’s Dylan Walsh (Husqvarna) twice finished tenth in the MX2 class and that was good enough for eighth overall for the GP. He is now 13th overall in the championship after two rounds.

MXGP heads east and to the European mainland this week with round three taking place in the rough shallow sand of Valkenswaard for the Grand Prix of Netherlands next weekend.